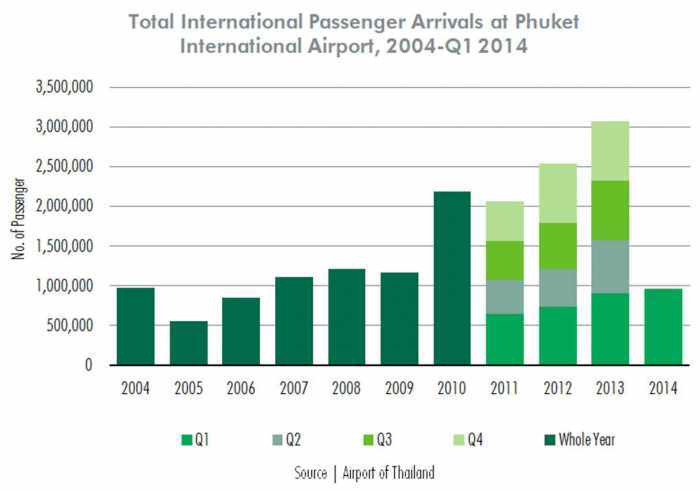 PHUKET: The number of international tourist arrivals to Phuket grew by 6.9% year-over-year (YOY) to 962,953 arrivals in the first quarter of 2014. An increase in direct international flights to Phuket have helped insulate it from any negative impact from the ongoing political turmoil in Bangkok, according to CBRE.

The average occupancy of upscale hotels (with rates over 2,000 baht per night) was over 80% in the first quarter of 2014. Hotels in Phuket were also able to increase the overall daily rate by 3.3% YOY, but this was mainly due to the baht’s depreciation in value against major currencies.

China and Russia were the largest feeder markets with 225,949 and 228,691 arrivals to Phuket airport, respectively. There was a 1.6% YOY decline in Chinese arrivals, a market that had been growing at 90% per year, while Russian arrivals grew by 20.4% YOY this quarter. These two key markets constitute about 50% of the total. The other key feeder markets, including Sweden, Korea and Australia only account for about 5% each. The data shows the sensitivity of Asian feeder markets to political unrest in Thailand and the lack of concern from Russian tourists regarding the same.

Phuket is, however, becoming more dependent on Chinese and Russian arrivals whereas in the past, there was a greater spread of key feeder markets. The risk is that there could either be an event that prevents people from these markets from travelling, such as an economic downturn, or that their attitude to Thailand as a destination suddenly changes.

Although the Phuket hotel market is surviving, not every grade of hotel is prospering. Hotels are classified into four grades: luxury, first-class, mid-range and economy based on achieved room rate.

REVPAR (revenue per available room) is the combination of room rate and occupancy, and is a measure commonly used to analyze performance. First-class hotels with rates between 4,000 to 10,000 baht per night had the best REVPAR. The positive aspect of this result is that it shows Phuket is not a zero dollar tour destination with tourists being pushed into the cheapest hotels and the tour operators hoping to gain revenue from commissions on shopping and entertainment.

CBRE believes that Phuket will remain one of Asia’s leading tourist destinations. The airport is being expanded which will reduce capacity problems. The dependence on a limited number of feeder markets increases risk, but there is still potential for growth. There were about 100 million outbound Chinese tourists last year and only 4.7 million of them came to Thailand.

The challenge for hotel owners is that if a property becomes dominated by one nationality, it tends to drive other nationalities away so the potential growth from key feeder markets needs to be handled carefully. The best revenue will come from quality, not quantity. Therefore, tourism policy makers, hotel developers and operators need to focus on long-term profitability for the Phuket hotel market.

The military coup is bullish for the Thai Stock Market