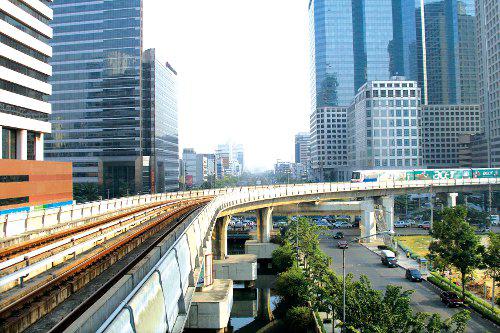 PHUKET: Over the past few weeks, political debates in Thailand have often been centered on the government’s national high-speed railway project. Punches, counter punches and even the kitchen sink have been thrown into the arena. Who the heck needs to run with the bulls when you can get gored by an out-of-control locomotive?

During the same period, I was able to sit through a presentation by the Thai Transport Ministry and in clear terms, a very literate gentlemen explained the plan. First of all, we were off to a flying start because there actually was a plan. At least there is a power point presentation and handouts were promised. In a nutshell, the massive 2.2 trillion baht infrastructure project is meant to connect up all the loose ends of the Kingdom and usher in the modern age.

According to the spokesman, the Thai planning method early-on had followed an American type scheme, which was later abandoned for a UK model. Yes, in case you skipped over this paragraph, this was not lowly millions or billions, but the trifecta of supersizing – trillions. My mind has stalled for a moment with all of these zeros.

Back from the brain freeze, the entire through process of returning from planes to trains is that Bangkok has reached the boiling point and the process of decentralizing the clash of the titans in the City of Angels is an absolute must. Hence, while the rest of the world is largely urbanizing, Thailand is deemed to be better – it’s de-urbanizing. And if two ends must meet, leave the cars at home as the vehicle of choice is going to be a train.

I did question the thought process here, as without a doubt, every other Asian nation is seeing their gateway urban areas continue to multiply faster than sheep. Was it logical to assume that corporate offices would now relocate from Bangkok’s Sathorn district to sunny Roi Et, or lets say the booming metropolis of Phitsanulok? There was no clear retort.

What caused me further confusion is the current government’s new car initiative for first time buyers, – didn’t this run contrary to the edict of get on the train? Or else… Of course it did, but Thai politics are not unlike those everywhere in the world, a deeply confusing web of incomprehensible wheeling and dealing.

Call in the Ministry of Silly Works? Seems they have gone home for the day. I’ve had a look at the numbers and while Bangkok has more than 8 million residents, in China this would not even make any list – it’s a very small market. Go beyond Bangkok to smaller areas that rely on manufacturing, tourism or agriculture; this is the land of Isuzu pick-up trucks.

Are these people going to be crossing the country on high speed trains on a whim? Probably not. Wisely though, the transportation representative threw tourism into the pot, citing Europe as an example of visitors zooming from Venice to Bruge at the drop of a hat. Yet, what would become of the charter flights and low-cost airlines?

Was this meant to supplement them or else compete and simply divide rather then conquer? Frankly speaking, the power point presentation was damned impressive but the one underlying question remained – who was going to pay for this? Of course the answer was that the country would take on massive levels of debt. This remains the contentious cage fighting scenario being played out between the ruling Pheu Thai party and the opposition Democrats. There is little doubt what a vision of the future Bangkok’s skytrain has been.

Yet I struggle on poorly executed projects like the Makkasan in-town check in at the airport express. This is failure at its worst. How would Phuket fare in the world of bullet trains between the island and Surat Thani? Can there really be enough traffic to make any economic sense? I’m taking the easy route and throwing that one back at readers. As for me, I can see urban transit, but give me a choice between a plane or a train and I’m on the plane every time… unless it’s AirAsia, but let’s not even start on that one.

Bill Barnett is the Managing Director of C9 Hotelworks and can be contacted through C9hotelworks.com