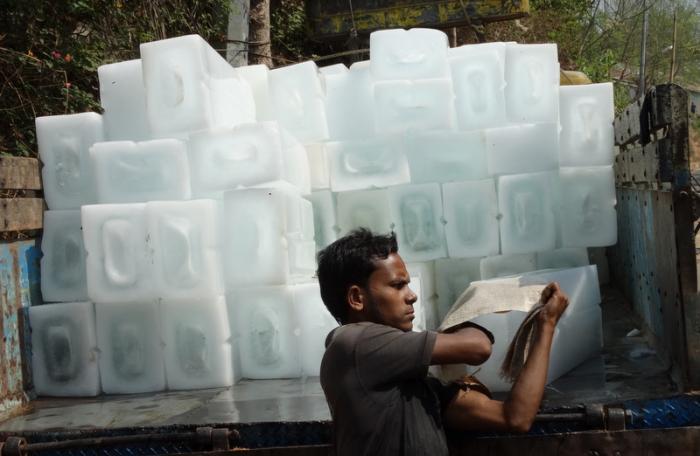 PHUKET: Songkran can be a lucrative time of year for the island’s ice makers as sales rise with the summer heat. Many revellers load barrels onto pick-up trucks, filling them up with water and a big block of ice.

In fact, Songkran ice sales are a good barometer for measuring the state of the tourism industry on the island, according ice factory owner Jiraporn Piromrit, who runs Kwanyuen ice shop on Phra Barame Road and distributes ice to restaurants, shops and bars in Patong.

“We usually get a lot more orders during Songkran. However, we can see from last year’s sales that the number of tourists was down compared to previous years,” said Ms Jiraporn.

“Orders for blocks of ice dropped by about half last year, but orders for ice cubes increased. Although this meant we did not really lose much income, it was an indicator that people were generally spending less; buying ice cubes in small amounts rather than the more costly blocks of ice.

“However, it’s difficult to predict sales during Songkran. We just have to see how it goes, which will depend on the number of tourists visiting and whether or not there are any restrictions put in place.”

The manager of the O ice factory on Wichitsongkram Road, Patorn Neti, said she usually sees a 20 per cent increase in ice sales during the Songkran festival.

“We usually distribute about five tons of ice in the Wichit area each day, but sales usually increase by about 20 per cent on April 13 and April 14,” said Ms Patorn.

“Water shortages in the dry season can be a problem, but it has never reached a crisis point. When water becomes scarce, we reduce our output and let our customers know about it.”

Ms Patorn reasoned that while O Ice in Wichit maintains a fairly steady output year-round for customers in the area, ice makers delivering to tourist zones were the ones most affected by fluctuations in the tourism industry.

“We are doing alright, but I have heard that some ice-making operations with customers in Patong have not been doing so well since the middle of last year, and there are no signs that it will be any better this year,” she said.

Finance: What is a contrarian investor to do these days?