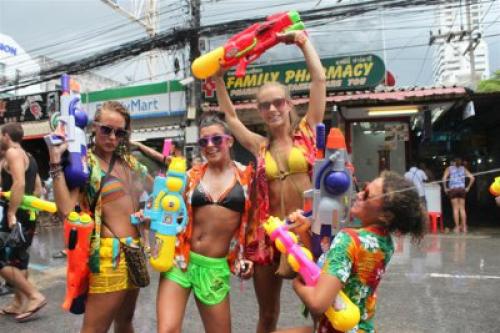 PHUKET: The Tourism Authority of Thailand (TAT) Phuket office expects upcoming festivities this month to generate between 600 and 700 million baht for the local economy.

He announced that the holiday period officially starts tomorrow, with Chakri Memorial Day, which will be officially celebrated nationwide from April 6-8.

This will be followed next week with the Songkran Festival, starting on Thai New Year’s Day, Saturday, April 13 and officially celebrated until Tuesday, April 16.

Mr Chanchai said that April is already a busy month for tourism since it is during the Thai summer school break (early March to early May): “From our inquires with hotel operators, both at the beaches and in town, occupancy is at about 75 to 80%. It will definitely increase during the Songkran period.”

“Even if the Songkran Festival in Phuket is no match to Chiang Mai in the North, or Bangkok, but here we still have a number of noteworthy Songkran events, whether in Phuket Town or in Patong, where there will be the ‘Water Festival on The Beach’ event on April 12 and 13. Also, there is Big Bike Week, which will feature more than 5,000 big motorcycles coming to the island from April 14 to 21.

These activities will add a lot of color and vibrancy to Phuket’s Songkran celebrations.” he said.

Moreover, Mr Chanchai noted that European tourist arrivals to Phuket are still strong as it is still cold in Europe, adding that their numbers are expected to start declining next month.

Nonetheless, he remains bullish about the tourism industry overall, thanks to an influx of mostly Asian tourists from China, South Korea and neighboring countries, as well as Russia, the Middle East and India.

“Average occupancy around the island is at 60 to 65% and this [stems] from having direct flights to Phuket from all over Asia, which has made tourism in Phuket strong year round… There is no low season here like in other tourist destinations,” he concluded.