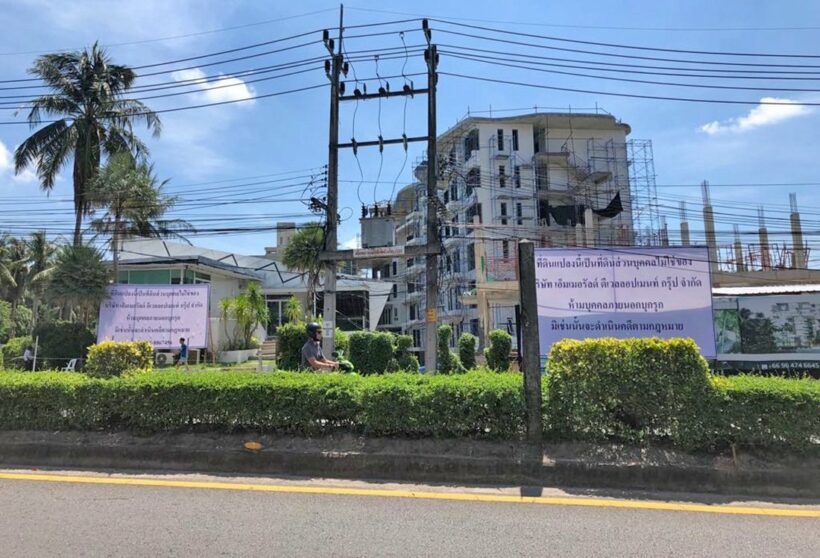 A barbed wire fence has been erected around the main offices for the Emerald Development Group and two signs erected in the front of the property.

“This is a personal land plot which does not belong to the Emerald Development Group Co.,Ltd. Outsiders are not permitted or else legal action will be taken. Tel: 085 886 7456” 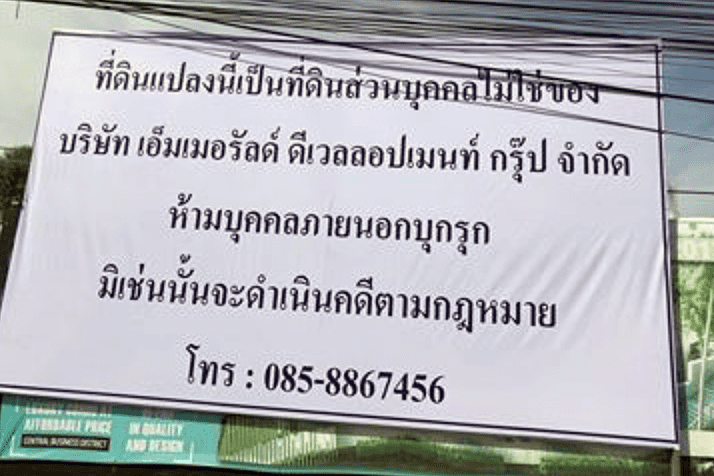 The erection of the fence and signs follow a week of PR from the Emerald Property Group and its CEO ‘Mai’ Sawit Ketroj as they attempt to contain damage following allegations into the company’s operation and financial dealings.

Khun Mai was questioned by Patong Police on May 2 following his arrest at Phuket International Airport the night before. Tourist Police Deputy Commander Maj Gen Surachet Hakpan said at a media conference that afternoon…

“After the investigation, we requested an arrest warrant from the Phuket Provincial Court for Sawit Ketroj. He was arrested at the Phuket International Airport. He is to face charges in relation to fraud.”

“There are more than 300 victims, most of them are foreigners. Embassies have been informed to warn their citizens about the situation. The cost of damages from this case is now estimated at a billion baht.”

Since the initial media conference where Maj Gen Surachet outlined the first round of cases there have been new litigants filing cases and foreign lawyers contacting Patong Police over additional charges over alleged wrong-doings in relation to the Emerald Development Group.

Khun Mai was released on bail last Tuesday (May 8) by the Phuket Provincial Court – a situation lawyers for some of the litigants and described as ‘a bad sign’ for the upcoming court cases.

Since his release Mai has been trying to stem damage from the revelations over alleged fraud. An email has been sent out to investors (printed without corrections).

“We at Emerald Development Group would like to inform you that the news from the 2nd of Mr Sawit Ketroj (Managing Director) 2018 have been not accurate and are intended to damage our reputation. We will arrange a press conference shortly and provide all actual facts of the current events and how we will move forward. In the meantime we would like to take this opportunity to clarify that the Managing Director Mr Sawit Ketroj still continues to operate the business and will do everything to fulfil the companies obligations towards its clients and affiliates. Emerald Development Group has 4 affiliated companies. There has been an incident in only one of the companies which we are in the process of resolving and all the other companies operating as normal. After hearing the news we understand that clients and business partners alike are feeling very insecure about their investments. Hence we want to take the time to meet and discuss personally every case or purchase with every client or their representative to present the facts for each development and move forward in satisfying way for our clients. This is our highest priority. Please contact us at customerservice@emeraldgroup.co.th so we can arrange to accommodate everyone’s request”

The Emerald Development Group website is still in operation selling property with no reference to the current legal cases against the company’s Mangaing Director. The Thaiger has spoken to Khun Mai this week and look forward to attending the forthcoming press conference.