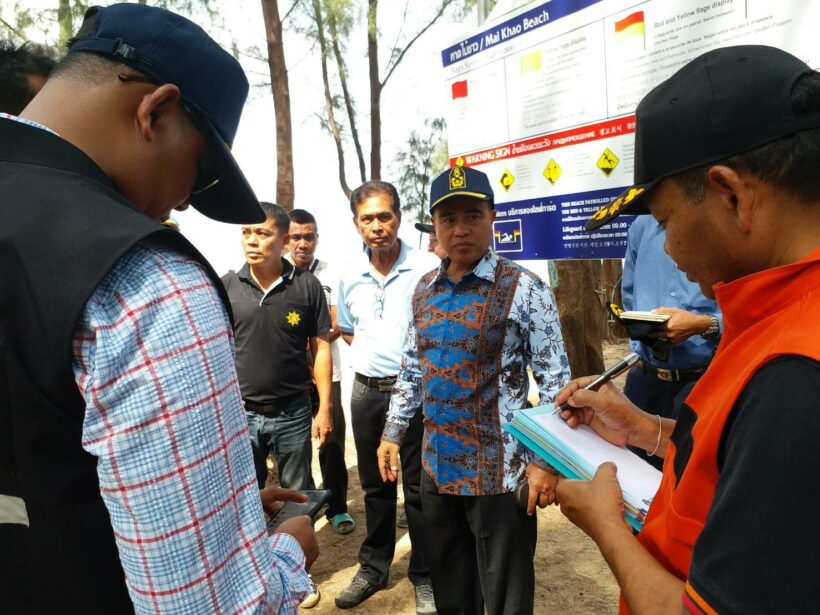 Three more lifeguards will be hired.

Governor Norraphat says “Currently there are no beach lights, CCTV camera or tourist service centres at Mai Khao Beach. We have ordered local administrative organisations to install these facilities as soon as possible. Tha Chatchai Police will install a ‘Red Box’ at the beach too which will be staffed with police and security officers. A tourist service centre will be installed as well.”

“Rewards will be given to lifeguards on beaches that don’t have any injuries or tourist deaths from preventable marine incidents. Lifeguards are being provided with ongoing rescue and English-language training. If any more equipment is needed, please inform local administrative organisations. They are all prepared to help and have a stake in maintaining safe beaches on the island.”

After that officials went to visit Nai Yang Beach.

Governor Norraphat says “The topography of Nai Yang Beach is not generally a risk for marine incidents. Most incidents to beachgoers at Nai Yang are injuries from jelly fish. The Sirinat National Park have provided four officials who are working from 9am to 5pm every day. These national park officials have been trained in marine rescue skills.”