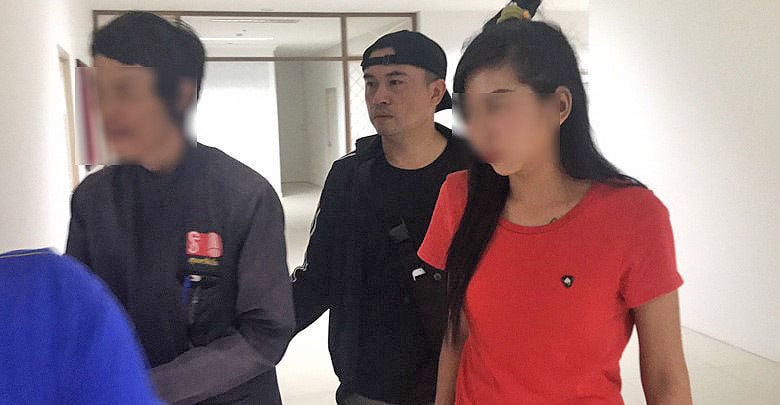 A woman and her husband have been arrested after she stole a credit card from her boss and used it go to on a spending spree.

Nattamon Puangjumpa, 26 years of age, and her husband Pornchai are now facing charges of theft and credit card fraud after she took the credit card from her boss’s desk.

Thai Residents reports that Nattamon began using the card to withdraw cash, with her boss not realising what had happened until he received the credit card bill.

The victim had never activated the card for use and immediately suspected his former employee, filing a police report the same day. Police found the woman hiding out in the Jomthong district of Bangkok and arrested her. Nattamon admits that while working for the victim as a company administrator, she stole the credit card from his desk.

She then called the bank to activate the card, claiming to be the cardholder. Once activated, she was able to use it to withdraw cash. It’s understood she managed to withdraw at least 10,000 baht before she was caught.

The woman claims she stole the card because she couldn’t afford to care for her five children. However, police discovered that there was also an arrest warrant out for her husband on theft charges.

He has admitted to stealing money from another Bangkok company but has pledged to repay all of it.

Keep in contact with The Thaiger by following our Facebook page.
News Categories:BangkokCrime
Related Topics:credit card fraudcrimeTheft
Up Next

The Government’s Covid-19 task force says a 9 year old Sudanese girl who has tested positive for the virus is undergoing treatment in a Bangkok hospital. It’s understood the child is the daughter of a diplomat and was self-isolating with her family at a condominium in the capital after arriving in Thailand. Thai media have been camped outside the diplomat’s condo off Sukhumvit in central Bangkok all morning. Dr. Taweesin Visanuyothin from the Center for Covid-19 Situation Administration confirms the family was not required to carry out the 14 day mandatory quarantine required of other foreign arrivals and repatriated Thai […]

Man dies in collision after car bursts into flames in Bangkok

A man has died after the car he was driving burst into flames when it collided with another vehicle. Nation Thailand reports that the accident happened in the Nong Jok district of Bangkok. It’s understood the victim, named as 47 year old Issara Bangyai, was test-driving a Mazda sedan in front of a car showroom when a pickup truck jumped a traffic island on the other side of the road and ploughed into him. The force of the impact caused the Mazda to burst into flames. Police and firefighters raced to the scene and, after extinguishing the fire, found Issara’s […]