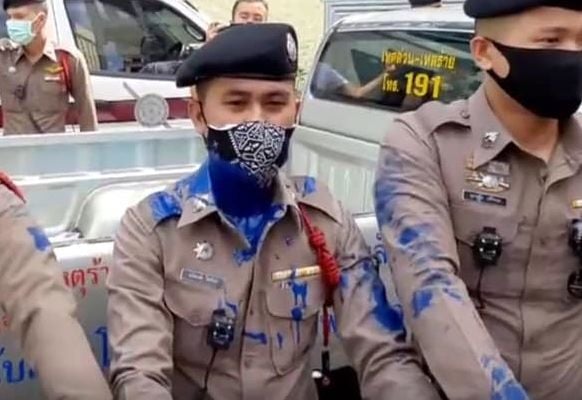 Paint was splattered on a police officers and police barricades were pushed away by a crowd of people protesting the recent charges filed on 15 activists involved in the July 18 rally.  The protesters were able to force their way to the Bangkok’s Samran Rat police station’s front entrance and the charged activists entered to confront police.

Police recently charged the 15 activists for violating cleanliness and disease control laws and for violating the emergency decree, which was still in place during the July Free Youth rally at Bangkok’s Democracy Monument.

At the July rally, hundreds gathered at the monument demanding the dissolution of the current Thai Parliament, demanding a new constitution and the removal of PM Prayut Chan-o-cha and his government. They also accused the government of restricting the free expression of Thai people. More pro-democracy protests have been held since then.

As a form of protest against the charges, the activists camped out for a last night at the October 14 Memorial in Bangkok, saying they were “sleeping in camp, not sleeping in prison.”

They walked to the police station this morning to confront the police about their charges. More than 100 people walked with them. A banner said in Thai “Down with dictatorship. Long live democracy.”

Police prepared for the rally and set barricades in front of the police station, but the barriers were pushed away by the mob of protesters.  A container of blue paint was thrown at police by singer-songwriter Chai-amorn Kaewwiboonpan, known as Ammy of the Bottom Blues band.

“This is not a threat. If you continue to bully us, I will bully you back with a form of art.’’

Police say they’ll press charges on the people who removed the barriers and they’ll release the 15 summonsed activists after questioning.

Japan’s PM Shinzo Abe to step down over health