An armed man, apparently high on drugs, was arrested yesterday after driving a motorbike onto the runway area of Bangkok’s Suvarnabhumi Airport. One officer was slightly injured in pursuit of the man.

Yesterday, the Director of Suvarnabhumi Airport, Kittipong Kittikachon, explained in a statement saying the man accessed the restricted areas, including the tarmacs, taxiing areas and runways, about 11.50am. The Security Control Centre of the airport was monitored the man via CCTV and sent out a security team to track him and apprehend him.

When the officers confronted him, the man tried to escape by breaking two glass doors to get back into the terminal. Security officers finally arrested him at 12.30pm. He was armed with what looked like a small pistol, a small axe, scissors. He was also carrying one methamphetamine tablet.

As security guards chased him around the tarmac under a sky-bridge, he dodged a weaved whilst trying to strike guards with a small axe, whilst trying to get a small pistol out of his pocket. He then headed up into the sky-bridge where he smashed his way through a glass door where officers were able to capture him.

You can watch the chase HERE.

According to Thai media, the suspect is reported to be a 34 year old Thai man who was under the effect of illicit drugs. The airport director insisted that the incident didn’t affect the airport’s services, passengers or staff working at that time. He said the security teams were able to find and suppress the man without a major incident. He added that one officer received a non-critical injury and received first aid at the airport without needing to go to hospital.

The suspect will be charged for breaking into the restricted area inside the airport whilst carrying weapons that were potentially harmful to the safety of the airport. He has also been charged with destroying airport property and possessing and using illicit drugs. 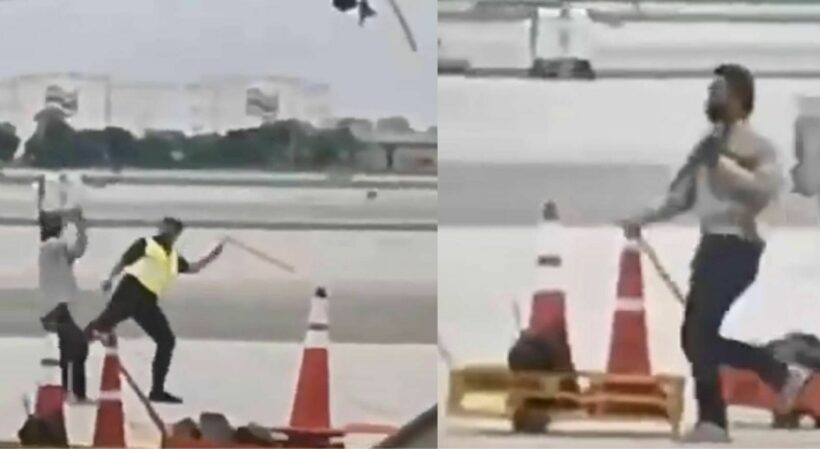 President of a top university resigns after air hostess photos