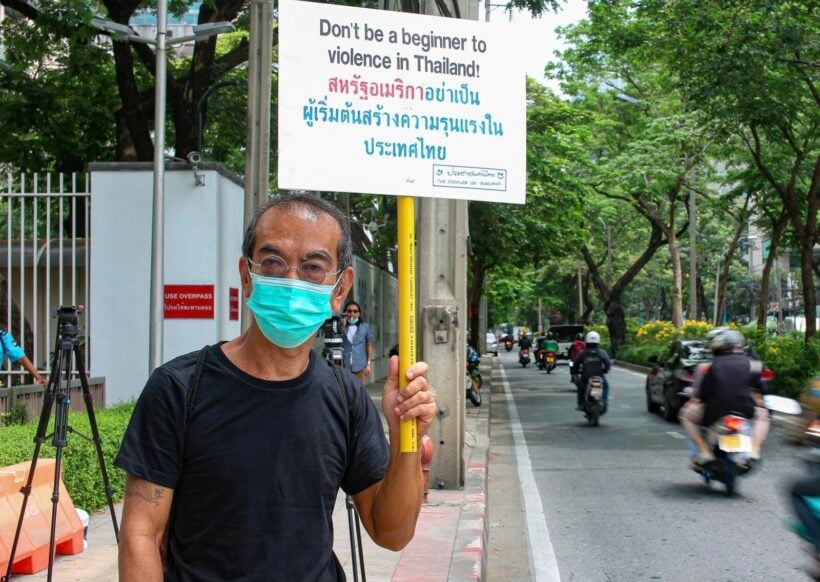 In the midst of a pro-democracy movement in Thailand, some claim the United States government is influencing Thai politics and even fueling the divide between political parties, particularly those who support the Thai monarchy and the younger activists who are pushing for democracy and monarchy reform. Yesterday, a group rallied outside the US Embassy in Bangkok calling on the American government to stop interfering with Thai internal affairs.

One of the leaders of the Prachachon Khon Thai group, Phichit Chaimongkon, says the American government pushes for democracy across the world and has been meddling in the affairs of various countries for the past 2 decades, leading to conflict. He claims the US has been involved in political groups in Thailand that threaten both national security and the monarchy.

The demonstration was led by Nitithorn Lamlua, a lawyer and a former leader of the now-defunct People’s Democratic Reform Committee, a group that pushed for democracy with the king as head of state and called for the removal the then-prime minister Thaksin Shinawatra. Yesterday, the group submitted a letter to US Chargé d’Affaires Michael Heath in its second call to the US government to stop interfering in Thailand’s internal affairs.

US embassy spokeswoman Nicole Fox says the US government is not funding or supporting protests or political movements in Thailand.

Back in October, a group of Thai royalists gathered outside the US Embassy in Bangkok and called on the American government to stop a so-called “hybrid war,” saying the US was interfering in Thai politics and creating a political divide in Thailand.