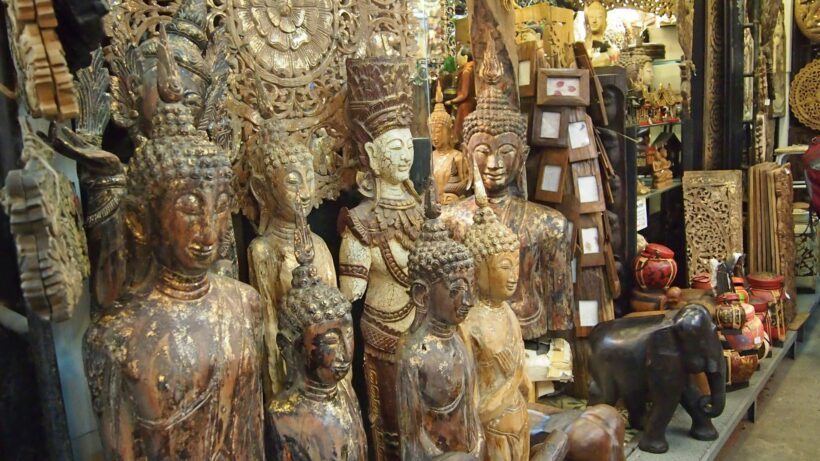 TheIndonesian island of Bali is one of the largest producers and exporters of Buddha images around the world and, according to the Knowing Buddha Organisation, should stop commercialising Buddha’s image.

Yesterday at Chatuchak weekend market in Bangkok, was the site of a massive gathering by Buddhists organised by the Knowing Buddha Organisation, educating and pleading to the world to stop selling and buying the image of Buddha and using it as decoration. Shoppers stopped to read signs and listened to KBO speakers explain why, in their opinion, it is wrong to use Buddha’s image for decoration in homes, gardens, hotels, bars, restaurants or spas.

“We had no idea that buying or using Buddha’s image was offensive to Buddhists or disrespectful to the Buddha” said many foreigners visiting the market.

Market vendors whose shelves were filled with images of Buddha for sale as decoration hid in their shops, as nearly 1000 marchers passed by their stores.

“The atmosphere was like a bright light shining through the market exposing the wrong and protecting our hero the Buddha” said Patt Pattana a spokesperson for the knowing Buddha Organisation.

Thai vendors, mostly Buddhists, know they are doing wrong by selling Buddha’s statues and images as Art to unsuspecting tourists. Today we could see the shame in their faces.

Earlier in the day the Knowing Buddha Organisation was invited to speak at Wat Arun Temple (the Temple of Dawn), to French television about the massive merchandising of Buddha around the world.

“The World is waking up to the Knowledge that it is a sin and bad Karma to use Buddha’s image” said Sucheewa Sangduen a member of the Knowing Buddha Organisation.

“As the world is being educated and reminded that Buddhism is a religion and the image of Buddha is not just a piece of art that should be used to bring calm to our homes or a business” said Sangduen.

The Abbot of Wat Arun praised the Knowing Buddha Organisation for it’s work with his temple and others around Thailand to educate tourists about proper attire and attitudes when visiting temples. The Abbot bemoaned how in the past visitors would arrive in shorts and tank tops and some women even posed with their shirts off in front of Buddha. The Knowing Buddha Organsation changed all this through signs and brochures teaching tourists how to behave and treat Buddha.

According to Pat Pattana it is all about education and teaching the world about this issue through kindness and compassion.

“We find that most foreigners had no idea that they were doing something wrong by decorating with the image of Buddha. And once we explain to them that this is wrong and bad karma, people are more than willing to fix their mistakes”.

The Knowing Buddha Organisation founded by Vipassana meditation master Acharavadee Wongsakon. Acharavadee who had visited the Buddha Bar in Paris a decade earlier, was devastated that the Buddha Bar had replicated a Thai temple and installed a dance floor and Bar. She returned to Thailand to set up an organisation to educate the world about respect and morality and the proper use of Buddha for worship.

The organisation’s website knowingbuddha.org explains the do’s and don’ts of using Buddha’s Images. The organisation can also be contacted to help individuals and commercial organisations learn how properly remove Buddha art from their homes or commercial venues.

One such a case was a resort in Bali which had large murals of Buddha carved in stone. The KBO organisation showed the owners how to re-carve the murals into angel heads. Other cases learned how to properly and respectfully dispose of unwanted Buddha decoration.

“Respect is common cense” is the motto of the Knowing Buddha Organisation.

(The Thaiger notes that nowhere in Buddha’s teachings does it demand people not to recreate or worship the image of the Buddha.)