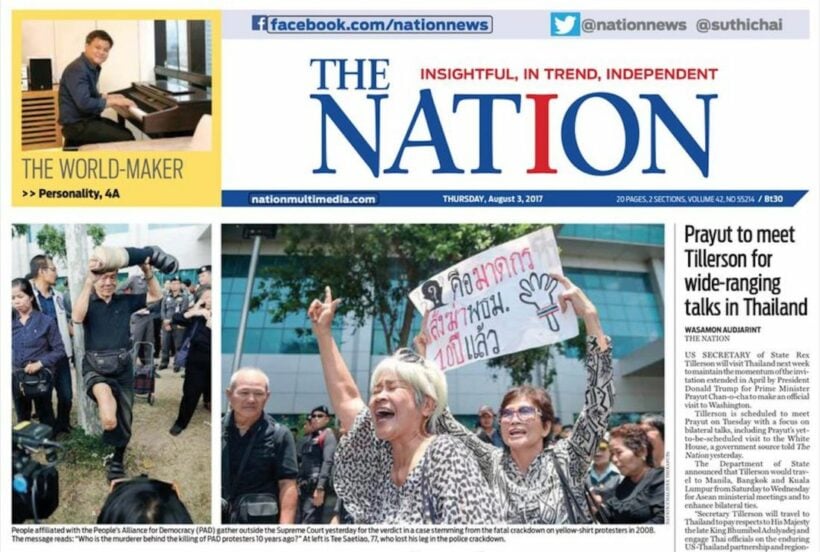 Another big national newspaper bites the dust, following an inevitable worldwide trend. A sad day for The Nation as they announce the closure of the Bangkok-based English daily after 48 years.

It leaves the Bangkok Post as the only English language national daily.

The Nation will end its print edition with its last issue scheduled for June 28.

In making the announcement today, the Nation Multimedia Group CEO Somchai Meesen, promised there would be no layoff of editorial staff, who will continue to work and focus full-time on the company’s online platform.

Appearing on TV today, Somchai said that the migration by readers to social media as their main source of news, compounded by dwindling advertising revenues, have made it impossible for printed newspapers to survive.

He also said that most of The Nation’s readers are ‘new-generation’, have lived abroad and mostly read online services, adding that retail sales of the printed newspapers nowadays are limited to corporate clients, hospitals and airlines, and cost a great deal of money to produce.

Somchai said that the company had no choice to discontinue the print edition of The Nation.

As well as the online English edition, he said the company will be adding a Chinese-language online service, tentatively scheduled for October.

The Nation has an editorial partnership with The Thaiger.

The Nation goes online-only from July 1