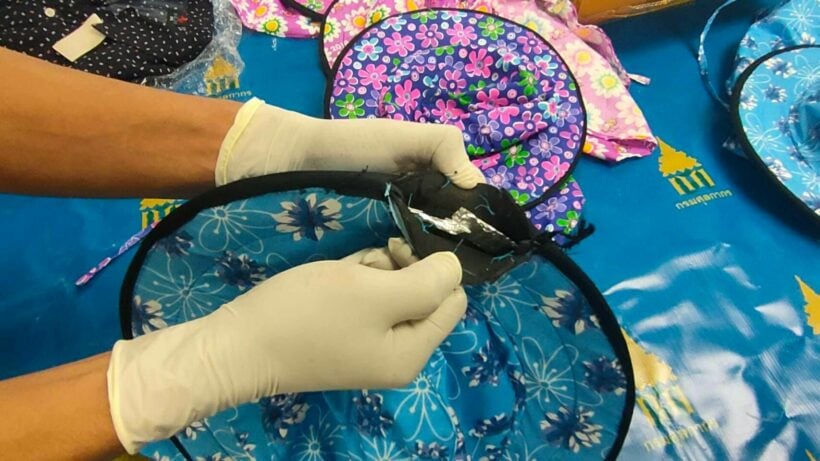 In another drug bust at Bangkok’s Suvarnabhumi Airport, 6,040 amphetamine tablets were seized from packages en route to Isreal. Officers searched 2 parcels and found the pills stuffed in the seams of sunhats. The packages had been mailed from Laos, according to Office of Narcotics Control Board secretary-general Wichai Chaimongkhol.

“The pills were hidden in the seams of sunhats in packages addressed to a Thai national in Israel. The packages came from Laos… We are coordinating with narcotics control officials at the Thai embassy in Vientiane to track down the sender.”

The ONCB worked with the special Airport Interdiction Task Force for the operation. Just last week, the team found another shipment of drugs also headed to Isreal. More than a kilogram of methamphetamine was found hidden in 3 thermos mugs.

“Preliminary investigation revealed that the mugs were heading to a camp in Israel, where some Thai workers take drugs to help them put in longer hours.”

A few months ago, Thailand’s Justice Minister Somsak Thepsutin called for Thai authorities to work with foreign agencies to investigating transnational drug trafficking with routes in Thailand. The move comes after a major bust in Australia where more than 300 kilograms were found on a Thai cargo ship. Since then, there have been many drug busts involving shipments destined overseas, including several busts at the Suvarnabhumi Airport and at Chon Buri’s Laem Chabang Port.