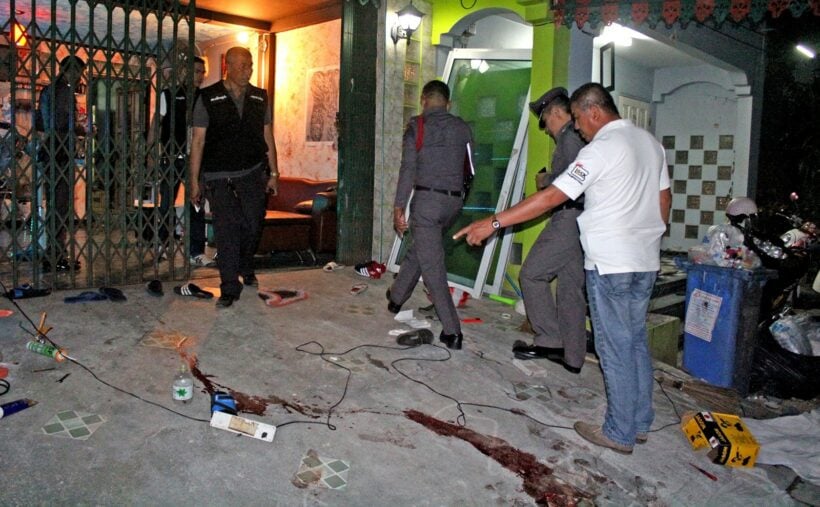 The two gunmen who allegedly shot a local man in Rassada have been arrested but they still deny all charges.

After an investigation police claim that Sinchai owed the men the last payment in a motorcycle debt. They asked for it many times and , finally, Sinchai requested them to come to his house.

Police learned that the alleged gunmen fled to Nakhon Si Thammarat where Warin was arrested in the parking lot of a temple in Chalermprakiet District while Damronrit was arrested in front of a house in Ronpiboon District in the same province.

Warin told the police that he didn’t shoot anyone but that it was his friend named ‘Bomb’, who also fled. He said that the cause of the shooting was because Sinchai bought a motorcycle at his shop, which costs 20,000 Baht, but Sinchai only paid 10,000 Baht. He said that he kept asking for the rest but Sinchai kept refusing to pay.

Last time when he Sinchai, Sinchai asked him to come to his house so he brought his friends with guns to protect themselves. An argument started and, Warin claims, his friend shot Sinchai and his friend. He fled to his girlfriend’s house in Nakhon Si Thammarat before being arrested.

Meanwhile, Damrongrit told the police that Warin invited him to go to ask for money at Sinchai’s house. He went there with some other friends of Warin with some guns and the man named ‘Bomb’ rode a bike following them. He said that he heard some gunshots and everyone fled. Warin brought him to Nakhon Si Thammarat but he denied being responsible for the shooting.

Police continue to investigate the incident and hope to arrest the rest of the group soon.