After a report from an undercover officer, police made a visit to Teerapong’s house in Soi Paniang, Ratsada. They initially found 50 pills of amphetamine and 2 grams of crystal meth in his pocket. The remaining drugs and weapons were found shortly after inside the house.

Teerapong confessed that he ordered the drugs from a friend named “Aek”, who lives in Bangkok, to sell to customers in Phuket.

He also says he ordered guns and bullets from a man (whom he doesn’t know the name) to protect himself from police as well as other drug dealers who might betray him. Some guns were planned to be sold to youngsters in the area who had ordered them earlier.

In another drug-related story, 23 year old Kritsada Wongduen from Kanchanaburi was arrested by Tha Chat Chai police at the checkpoint at the top of the island. Police found 185 amphetamine pills and 24 bags of crystal meth (about 12 grams) hidden in his underwear.

The mini bus that Kritsada was travelling on was a Hadyai – Phuket bus which was stopped at the checkpoint for a routine check of ID cards and illegal items,. Trained dogss quickly found Kritsada suspicious.

He is now in Police custody and has confessed to possessing drugs. 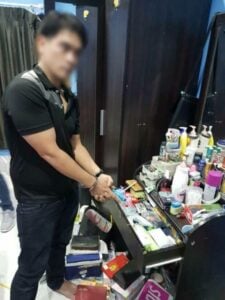 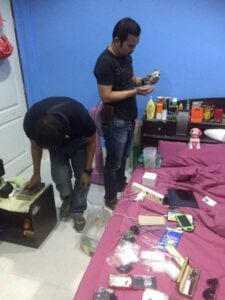