A young man from Pattaya is on track to becoming Thailand’s first Formula One driver. Born and raised in Pattaya, Kane Shepherd started racing at the age of 10, competing in various Thai championships and winning national titles every year.

He won his first Asian championship in 2014 and again in 2015. His obvious talent qualified him for three Rotax World Championships at various venues in Europe, the most recent being in 2016 where he finished overall 16th.

2017 proved to be another successful year for Kane, and a year where he cemented his potential to become Thailand’s first Formula 1 (F1) driver. Early in the year, he competed in the FIA F4 SEA Championship, with high profile races in Malaysia, the Philippines, Indonesia and Thailand, including Formula 1 (F1) and Asian Le Mans Series events. Later in 2017, Kane was awarded the “Rising Star” Award by the Royal Automobile Association of Thailand (RAAT).

At such a young age, Kane is a model ambassador for both Thailand and motorsport. His energetic and ambitious nature, coupled with discipline and motivation make him a perfect athlete to sponsor. 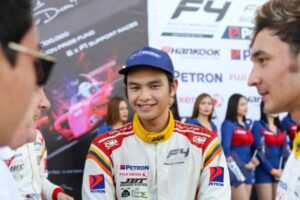 Find out more and sponsor this young man HERE.