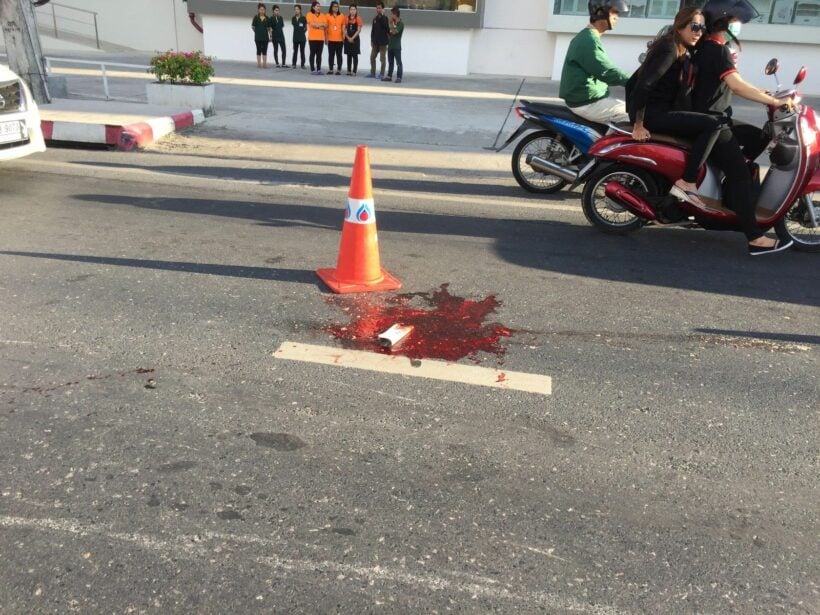 Wichit Police have been notified about an accident at 4:40pm yesterday (May 15) on Chao Fa–Suanluang Road, opposite a furniture mall near Naka Jor Su Kong Shrine in Wichit.

Police, along with medical staff and rescue workers arrived at the scene to find a Honda motorbike in the middle of the road. Nearby was the body of 12 year old Chinnarat Kajatroka, a student at the Municipality 2 Baan Kathu School.

Chinnarat was wearing a red jacket and black shorts. He was covered with blood and his head had been critically injured. His remains were taken to Vachira Hospital in Phuket Town.

Nearby police found a tour bus parked on the side of the road. The bus driver had already gone to Wicit Police Station to present himself for questioning.

12 year old Apisit Kongwee, who is a friend of Chinnarat says, “We were heading from Saphan Hin in Phuket Town at high speed. Chinnarat was the driver and I was his passenger. We weren’t wearing bike helmets. Our three others friends were on another motorbike.”

“Chinnarat lost control of the motorbike while he was in the right lane. The motorbike fell onto the road and Chinnarat was bounced onto the left lane. The tour bus was coming from behind us. His head was crushed under the wheels of the tour bus. I was very panicked and upset so called his mother to the scene.”

Wichit Police are investigating the accident.