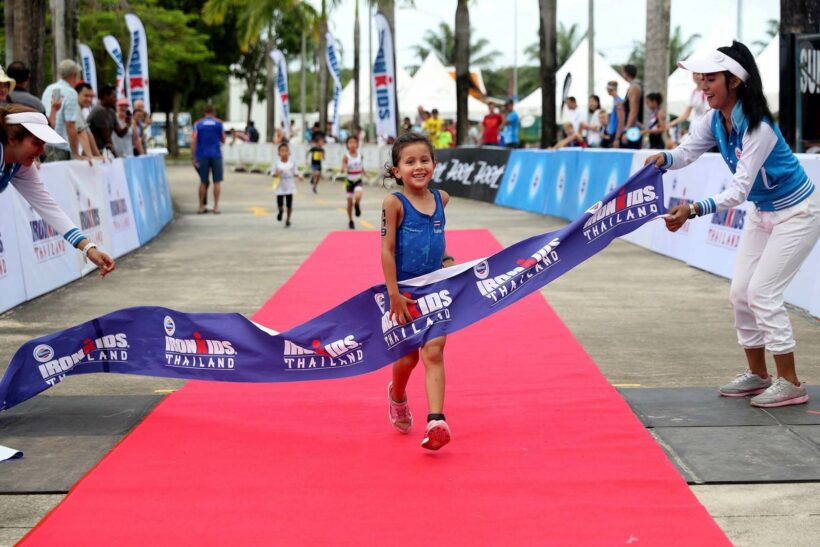 Over 100 young athletes were greeted with perfect race weather at Thanyapura Health & Sports Resort in Phuket on Saturday 25th November, 2017, as they competed in the second edition of the Foremost IRONKIDS Thailand.

“It’s been great to see so many youngsters join in our second Foremost IRONKIDS Thailand event in Phuket. Looking at the smiles on everyone’s faces, they all had a great time,” commented Mr. Wilfred Steven Uytengsu, President of Sunrise Events Inc. and rights holder for IRONMAN in South East Asia.

Racing got underway at 8:20am with the 13-14 age group. The race began with a 400 metre swim in Thanyapura’s Olympic-sized pool before athletes took to their bikes and endured a 12-kilometre bike ride through the surrounding areas. The final stage of the race was a three-kilometre run also around the surrounding area and finishing back at Thanyapura Health & Sports Resort.

It was 14 year old Randall Liew from Malaysia who took first place in the 13-14 age category finishing in a time of 44:07 and improving on his second place finish the first edition of the race held last year.

Lieu was followed over the line by Max Burford in second with a time of 50:14, and Amata Kanpai in third at 55:45.

Next to take to the pool was the 11-12 age group, which saw 26 athletes compete, and whose stages were a 300 metre swim, nine kilometre bike ride and two kilometre run.

First to cross the line in his age group was Tamino Lokenberg with a time of 32:45, he was followed by Charlie Bear Volaka (34:23) in second and Ati Krophum came in third at 35:57. First female in the 11-12 age group was Orakanya Thantharnon at 36:57, some nine minutes ahead of the second placed female Wasita Areewatananon (45:07) with Wariya Turongkinanon (46:43) rounding out the top three.

In the 9-10 age group, which had 41 competitors taking on a 200 metre swim, six kilometre ride and one and a half kilometer run, it was female athletes who took first and second places with Chayanit Dasri and Tess Evelyn Greaton finishing in 26:25 and 26:34 respectively, and the first male athlete, Max Pinfold, came in third at 27:34.

The 6-8 age category saw the largest number of athletes with 44 participants taking on the 100 metre swim, three-kilometre bike ride and one-kilometre run triathlon. Guillaume Haas Ryffel took first place honours finishing with a time of 16:10, Koran Chaichamroophan came in second at 17:35 and Marco Rauline and the first female athlete Khanticha Srikwan both crossed the line with a time of 18:06.

Dr. Olarn Chowiwattana, Corporate Affairs Director of FrieslandCampina (Thailand) PCL., says, “Foremost has continued supporting ‘Foremost IRONKIDS Thailand’ for two consecutive years. It is under the ‘Drink.Move.BeStrong’ campaign. With not only an aim to promote good health by drinking milk among children, Foremost also commits to encourage an active lifestyle among Thai youths and open up an opportunity for them to test the limits of their physical and mental stamina.”

While aiming to perform their best, all participants made the most of a fun and enjoyable morning and the crowds cheered them on as all sprinted to finish line.

Top three results in each category: