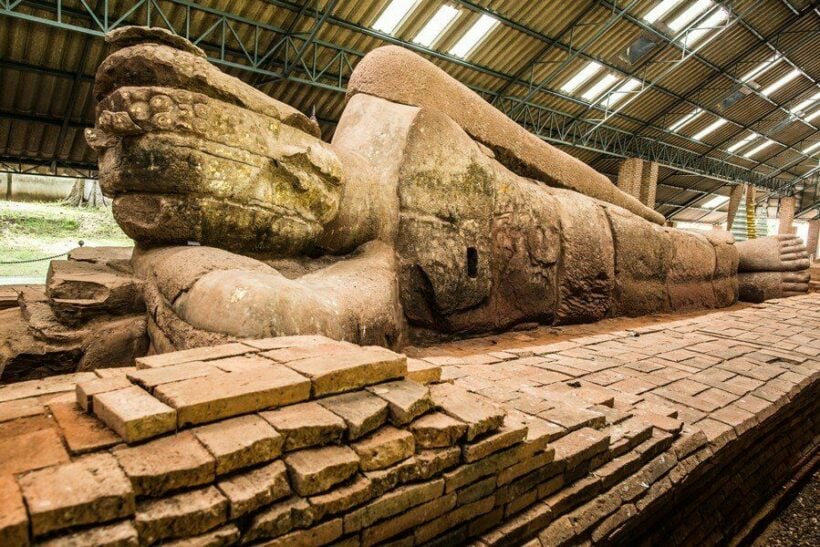 Thailand’s oldest reclining Buddha at Wat Dhammachakra Sema Ram is the latest casualty from the country’s central flooding. Authorities say the statue was partially submerged as a result of flooding by mountain runoff yesterday. The 1,300 year old Buddha is located inside the Muang Sema Historical Park in Nakhon Ratchasima’s Sung Noen district. The Dvaravati-style, sandstone image, which measures 13.3 metres and 2.80 metres high, is thought to date back to the 7th Century CE.

Heavy rain has generated runoff from nearby hills that poured into the village where the temple is located. The floodwater affected the structure which shelters the Buddha, with waters rising halfway up the statue. Around 160 homes were also affected by the floods, with reports of water being 1 metre deep in some areas. Consequently, residents were relocated to higher grounds.

PM Prayut Chan-o-cha has been visiting the Northeastern province of Ubon Ratchathani to survey the water and flood management situation. The prime minister was accompanied by several other ministers including Minister of Energy Supattanapong Punmeechaow, Minister of Interior Anupong Paochinda, and Minister of Digital Economy and Society Chaiwut Thanakamanusorn.

Previous visits on his trip included a stop in Nonthaburi province, where he was met with protestors shouting and throwing fermented fish at his motorcade and a stop on Chaiyaphum where police chided protestors as an embarrassment to the province as they shouted insults at the PM. These hostile greetings prompted authorities in Nakhon Si Thammarat to issue an official code of conduct ahead of a visit from PM Prayut, warning residents not to throw rotten eggs at the PM.

PapayaBokBok
11 hours ago, Jason said: It will last and endure with some care. Oh well..it was nice while it lasted in LOS...

Bluesofa
15 hours ago, Thaiger said: The 1,300 year old Buddha is located inside the Muang Sema Historical Park in Nakhon Ratchasima’s Sung Noen district Surely this can't be the first time this has happened in 1,300 years - what did…

DoUKnowWhoIAm
10 minutes ago, Bluesofa said: Surely this can't be the first time this has happened in 1,300 years - what did they do previously? The statue has survived this long all right. When everything else got ruined by the flood…

Dedinbed
23 hours ago, Thaiger said: The Dvaravati-style, sandstone image, which measures 13.3 metres and 2.80 metres high, Must've been a big towel to dry him off after ..

Bluesofa
2 hours ago, Dedinbed said: Must've been a big towel to dry him off after ..  Bit of a wide boy I 'believe'