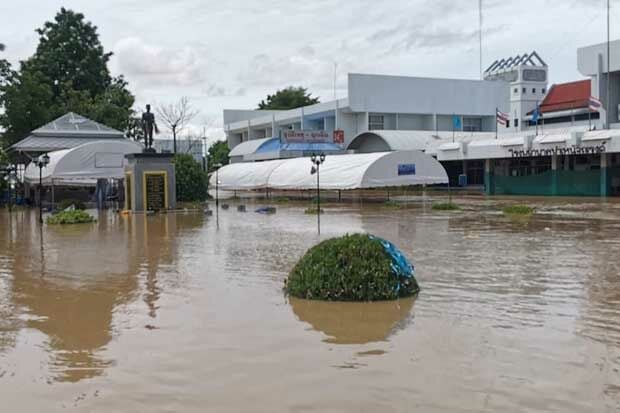 PHOTO: Bamnet Narong Hospital flooded and patients had to be evacuated today. (via Facebook Hook 31)

Around Thailand, heavy rains and flooding have ravaged the country. Earlier this morning, 40 patients were emergency evacuated from Bamnet Narong Hospital in Chaiyaphum by rescue workers as the facility flooded.

The hospital suffered severe damage as floodwaters caused the urgent evacuation as one of the buildings on the hospital campus was flooded up to 80 centimetres. An X-ray room and several labs were heavily damaged and unusable. Outside the hospital buildings, 4 vehicles and 7 ambulances were damaged, submerged in the rising floodwaters.

With the medical facilities rendered unsafe and unusable, 14 patients with more minor ailments were discharged and sent to their respective homes. Meanwhile, 26 patients with more pressing medical needs were transferred out of Bamnet Narong district to other hospitals throughout the province, according to the Hook 31 rescue unit this afternoon.

The permanent secretary for Public Health said that Sukhothai and Bamnet Narong hospitals were both damaged by the floods in the area, but Sukhothai hospital was about to avoid any evacuation of patients.

Across the country, heavy storms have affected 39 provinces as a result of tropical depression Dianmu and a monsoon trough in Northern and Central Thailand. Chaiyaphum was one of the hardest-hit provinces, but reports of flooding and damages have poured in from a dozen other provinces.

Phetchabun also suffered severe storms and flooding with water rising so high on some roads that Road 21 was completely close to traffic this evening. And officials have put out a warning of overflow or floods for low-lying areas situated downstream of Chao Phraya Dam as water will be released in greater volume in an attempt to prepare for the onslaught of run-off water coming from storms in the north of Thailand this weekend.

gummy
That is very unfortunate for a hospital especially to get flooded. Lets hope that funds will be made available to replace the damaged equipment as soon as practicably possible  for the benefit of the locals.

riclag
I remember  the floods in Sakon Nakhon 4 years ago. The worse flooding in 2 decades. When I searched areas  to buy land to build a house, I made sure it wasn’t in a low lying area around the city.…

AdvocatusDiaboli
2 minutes ago, riclag said: Many of Thailand’s provinces  will be susceptible to floods  because of poor drainage and natural conditions imop. Or maybe in some areas poor local / regional Government ability to plan and put in place realistic…

riclag
36 minutes ago, AdvocatusDiaboli said: Or maybe in some areas poor local / regional Government ability to plan and put in place realistic measures to attempt to inhibit flooding to a degree. Unlike Pattaya beach fiasco.  Your spot on .It’s…