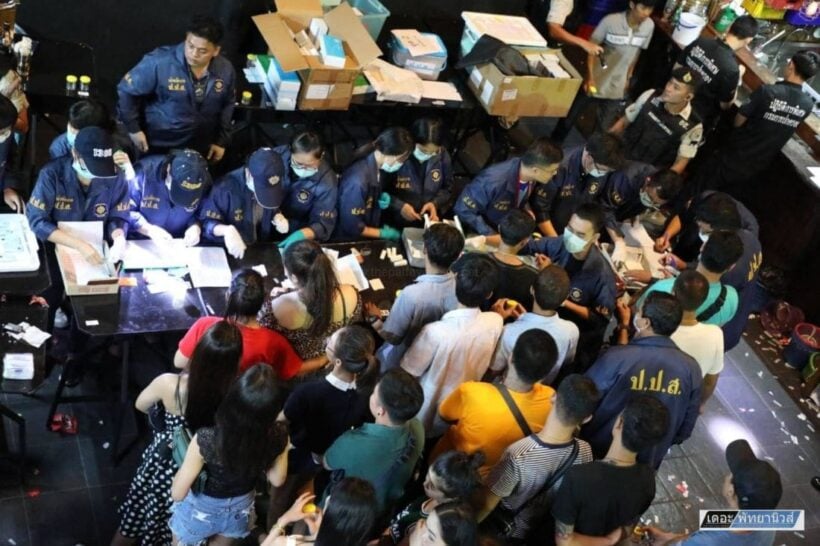 A total of 155 patrons have tested positive for drugs after raids on two popular Pattaya pubs early this morning. The pubs raided were Brazil Pattaya and 90’s Bar around 4am.

Police say searches found a 9mm pistol with 16 rounds of ammunition, a knife, 62 packets of narcotics, including ecstasy, ketamine and crystal methamphetamine and drug-taking paraphernalia scattered over the floor.

Over 300 customers were found drinking and dancing inside the Brazil pub in South Pattaya when officials raided the venue. Officials managed to corral fleeing party-goers trying to avoid police. The 41 year old manager of the one of the premises was arrested and charged with illegally operating the venue without a license and selling alcohol to people under 20.

Customers were asked to submit to urine tests. 142 in total, 94 men and 48 women, tested positive for drugs.

58 of the patrons weren’t carrying their ID cards with them.

When police raided 90’s Bar on Soi Bongkot in South Pattaya they detained a total of 13 customers, nine men and four women, who also tested positive for drugs. Many illegal baraku smoking devices were also found inside the venue.

The operator of 90’s Bar (un-named) was charged with operating the pub without a license, illegally selling alcohol, selling alcoholic drinks past legal hours and offering baraku to customers.

Before the raids, officials visited the venues posing as customers, police reported. They say that many customers were at the venues between 3am and 4.30am and staff members had turned off the lights at the front of the premises to look like they were closed. Police and officials will petition the Chon Buri governor to close down the venues for a minimum of five years.