“The containers were loaded with “dolls and toys” and there are no chemical substances present.”

That was the first explanation we heard after the fire that happened last Saturday, May 25, when containers from the KMTC Hongkong burst into flames at Laem Chabang Port, south east of Bangkok. The port area is just to the north of Pattaya on the eastern seaboard.

Firefighters spent nearly 18 hours battling the confounding blaze as it spread through the containers on the ship billowing toxic fumes and plumes of smoke, causing 228 people, including nearby residents, to be rushed to hospital with burns, eye irritation and breathing difficulties.

Financial losses, still not fully accounted for, are estimated at well over 100 million baht, according to a report in the Bangkok Post.

When a 15 kilometre radius was declared around the site as a ‘red zone’ local Thais became rightfully suspicious that a few dolls and toys going up in smoke could cause so much disruption.

Later it was declared that the dolls and toys were actually calcium hypochlorite, a flammable and potentially dangerous chemical. But authorities had to analyse the chemicals that had caused so much damage and smoke because there was no record of it being in the containers on the ship.

Calcium hypochlorite is widely used in water treatment systems, but the substance can release dangerous chlorine gases when burning.

It is classified as a Class 5 Hazardous Product, in a list of nine hazardous substances.

The Port director reported that the ship was carrying 676 containers from China and that the KMTC Hong Kong had failed to declare the chemical was in the containers.

When the ship arrived at Laem Chabang, 463 containers were offloaded with the remaining containers, including the 13 containers (the ones that caught fire), designated for delivery to an address in Samut Prakan.

According to records, the freighter originated in South Korea and made stops at Shanghai and Hong Kong before arrival in the Gulf of Thailand port. An investigation indicates that the 13 containers held 325 tonnes of the calcium hypochlorite.

Investigators and directors at the port say that the owners of the ship must be held responsible for not declaring the hazardous contents of the containers.

If not for the fire, port officials say, the illegally transported goods would likely have reached their destination without anyone knowing. Now the question is how many of these containers passing through the Bangkok port, full of hazardous chemicals, are passing through without being declared or detected?

Currently, the handling of dangerous goods at Laem Chabang Port is carried out by a private firm under a port authority contractual arrangement.

Following last week’s fire, the assistant director at Laem Chabang port says that all vessels tying up at the port must make a full declaration of materials and goods being carried aboard. 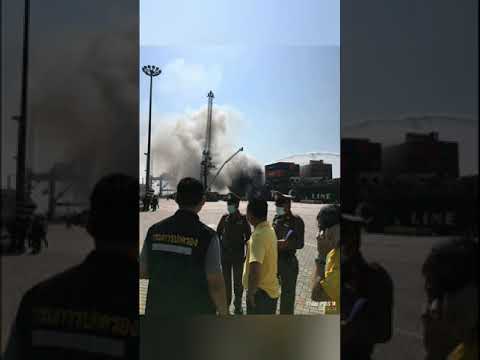