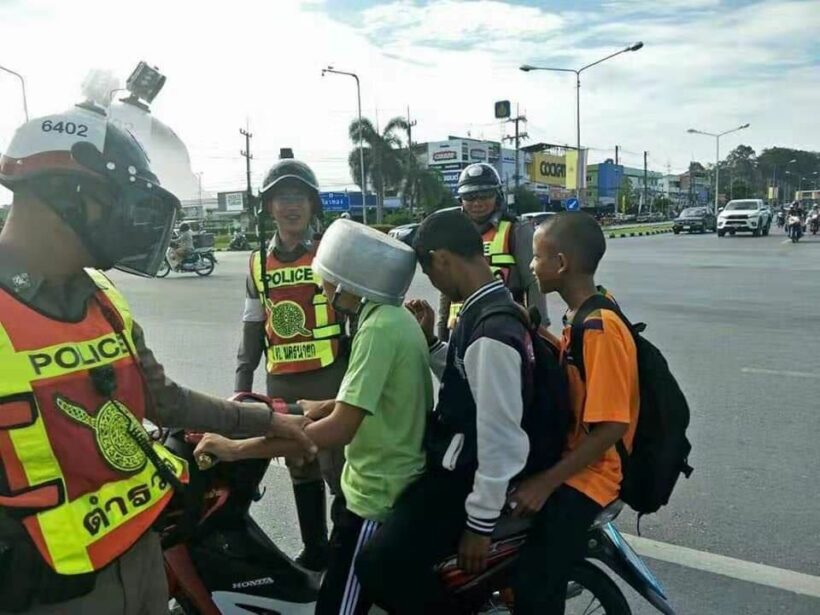 The photo has been a favourite floating around social media. Police called these three students to the side of the road on Thursday after the young driver decided to wear a cooking pot as a helmet on his head.

The incident was shared online by a Thanit BunBong saying that the police were initially confused by the ‘shiny helmet’ but took it as a good joke and had a laugh about the cheeky stunt.

The Police officer from Nakhon Nayok, north-east of Bangkok, said he was working as usual at the intersection. He called over the bike to see what the driver was wearing on his head.

When the motorbike got closer he realised the driver had a cooking pot on his head and the two young passengers had no protection at all. He said he laughed at the joke but warned the teenagers to never have 3 persons sitting on a motorbike again and to wear helmets next time before letting them go.

As to why the students had the cooking pot with them? They were heading to a cooking competition at their school. The students told police that when they saw the officer standing at the intersection, one of the boys put the pot on the driver’s head.

Good news, the motorbike was properly registered but the officer gave them a quick lecture about helmets and motorbike safety before letting them continue their trip to school.

No information is available about who won the cooking competition at school but we hope they gave the pot a good wash before using it.