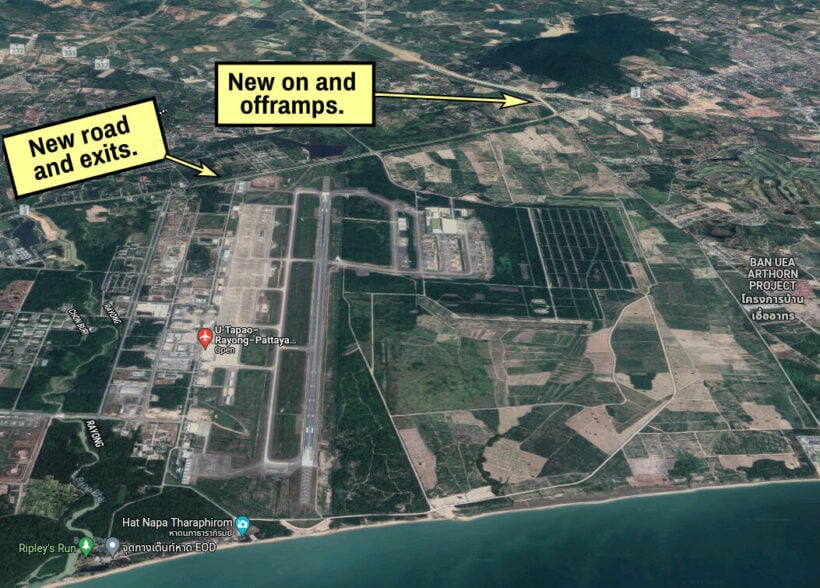 Plans are underway to ease traffic to U-Tapao Airport in Rayong, the primary airport to Pattaya, by linking it to a nearby street by constructing a 2-kilometre road. The Department of Highways announced the plan yesterday, saying the project will cost 4.5 billion baht and will break ground next year with a completion date set for 3 years from now.

U-Tapao is the closest airport to Pattaya and serves as an important link for tourism that is hoped to begin flowing back this month. The airport also serves the Eastern Economic Corridor industrial development zone, so the need to decrease traffic is imminent. The designs will widen access to the airport and help traffic move smoothly through the areas to the EEC.

Yesterday a meeting was convened, chaired by Rayong’s deputy provincial governor, to discuss the progress of the project at a hotel in Rayong. This was the second meeting on the project and focused discussion on the engineering facet of building the road to U-Tapao Airport, and the study included analysis on what could be done to reduce any environmental impact of the project.

The meeting addressed questions and concerns from the general public, as well as from stakeholders and the private sector, plus related government agencies.

The planned road with go from the U-Tapao Airport tollgate, pass through the air defence artillery division of the Marine Artillery Regiment, and link to Motorway number 7. An intersection on Sukhumvit Road will me a merging point for the new road and the airport entrance.

The project cost included elevating portions of the road, and designing it with semi-directional loop ramps connecting it the road for travellers from Sattahip and Chon Buri in the west, and Rayong from the east. Two on-off ramps will also be built to connect Motorway 7 and Sukhumvit Road.

The budget includes for signage to warn of the construction as well as extra lighting for areas near the construction that may cause accidents. It will also strictly follow environmental impact minimisation measures.

gummy
2 minutes ago, Poolie said: think inside the box The term is "thinking outside the box".   Thinking inside the box as you suggest would be in terms of a money box, perhaps that is what you meant