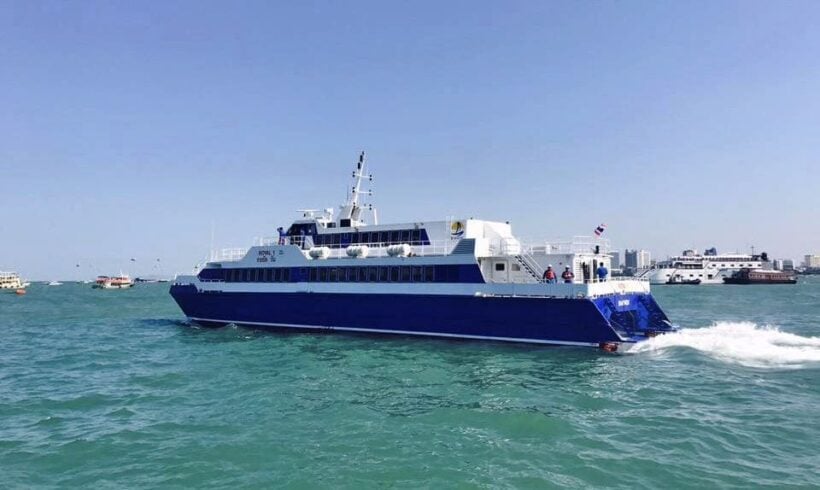 With travel restrictions for dark red zones limiting flights and bus services, ferries are not immune from the economic damages of Covid-19 either. The ferry service running between Hua Hin and Pattaya hasn’t been operating since last year due to Covid-19, but it now appears it will not ever restart.

Royal Passenger Liner Co was operating as the sole operator of the route, and the only ferry service utilising the Bali Hai Pier where it occupied Pattaya Port C.  Yesterday the mayor of Pattaya City announced that the ferry company, who had suspended their service citing the lack of foreign and domestic tourists travelling due to the Covid-19 pandemic, had requested a cancellation of their contract with the port.

The trip sped up travel time between the two popular tourist destinations, taking just one hour and 40 minutes to travel across the Gulf of Thailand between the destinations. Royal Passenger Liner operated a smaller catamaran that could seat 150 travellers and a larger ferry that could accommodate 262 patrons.

The troubled route launched in 2017 but struggled the entirety of its 4-year run. The ferry ridership was less than expected and the route between Pattaya and Hua Hin proved to just not be that popular. The ferry had various other troubles and setbacks along the way, but when Covid-19 started shutting down services and regions, it was the beginning of the end for the ferry route.

The Chon Buri Covid-19 Communicable Disease Committee set orders in place that first suspended the ferry service last year. But now the pandemic rages on and service remains inoperable, and there’s no estimating when things may return to near normalcy with tourism returning and ferry passengers lining up to travel between Hua Hin and Pattaya, and Royal Passenger Liner is pulling the plug.

Pattaya’s mayor said that they have no plan for any replacement company coming to replace the cancelled ferry to Hua Hin, and said that Royal Passenger Liner made renovations to the pier that aren’t up to government standards and the company will have to restore it to the original condition before the contract can be cancelled.

A new ferry had a test run last year from Sattahip near Pattaya to Prachuap Khiri Khan near Hua Hin, but it’s not a permanent schedule to replace the cancelled ferry route. Plans had also been discussed regarding building a bridge to connect the two cities as well.

Tim_Melb
On 8/12/2021 at 7:22 AM, EdwardV said: Another permanent casualty of the on again, off again lockdown model. The only difference is the ferry series is big enough to get noticed. Hope the government can do more to help those who…

Fluke
30 minutes ago, MikeV said: It was packed when I went. I asked twice if I could take a bicycle. I had a friend ask in Thai. Then the captain treated me like a criminal and they would not give…

MikeV
8 hours ago, Fluke said: Bicycles were not allowed on board . Did you think that the rules didn't apply to you ? I asked before buying the ticket. I was holding the bike and pointing to it while inquiring. …

Fluke
1 hour ago, MikeV said: I asked before buying the ticket. I was holding the bike and pointing to it while inquiring.  They said yes 3 times and once in Thai to my friend who called for me. Can you…

ExpatPattaya
Just becuse Royal Passenger Liner, Ltd has cancelled, does not mean another company will start up an operation.  Nothing to do with mayor of Pattaya other than City collecting money for their space at Bali Hai pier AFAIK