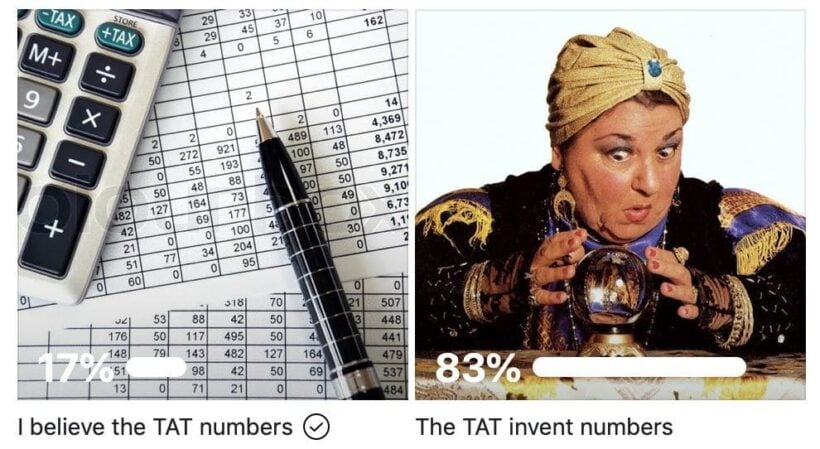 The internet has spoken, well The Thaiger’s Facebook page anyway, and there is a strong distrust in the statistics about tourist arrivals issued by the Tourism Authority of Thailand.

83% of people that voted said they didn’t believe the numbers quoted by the TAT. 17% believed the numbers were accurate.

The reasons for people’s disbelief aren’t fully understood as their objections come with plenty of vitriol and oozing subjective opinion. But the mood of the meeting is palatable and there is a large chunk of (mostly) foreigners who distrust the country’s tourism ministry.

In the past six months the tourism ministry has posted figures showing declines in certain segments, mostly a huge drop in Chinese tourists – nearly 9% in both April and May with smaller drops earlier in the year. They’ve also posted figures showing a drop of European visitors although not to the same level as the Chinese traveller exodus.

So, will the 83% now insist the TAT are making up these recent numbers as well?

It should be mentioned that the TAT don’t run around counting heads but get their figures from the Thai Ministry of Sports and Tourism which collate the statistics from the Immigration Department reports.

Here are some of the responses (edited)…

I don’t think many people believe ANYTHING a government department announces. It’s an insidious regime with NO transparency, riddled with nepotism, widely known for its subjective and targeted application of the law, deep seated corruption right to the very top and an alarming pact between the big 3. Without making a judgement, Thailand’s record of democracy is shockingly poor, as is its record of human rights and ingrained xenophobia. Therefore, transparency, accountability, checks & balances, consultative processes and independently collated statistics are virtually non-existent. But it’s a worthy conversation because it maintains the heat, even if it is only a minor irritant to those in power. – Chris B

They are sleeping in their holes. Only low budgeted quality tourist everywhere shopping 7/eleven lunch and dinner from Big C, that’s it. – Mir A

We would be doing what we are accusing TAT of doing, ‘Guessing’ as we don’t have any info to base our judgement on only a seat of the pants feeling. – Stephen H

It’s becoming harder and harder to believe any official report in Thailand. (Police cant find prostitutes in Pattaya, ect.) Denial and fear of presenting lower numbers have caused problems in Thailand before. Don’t know about tourism numbers but there is not much data for comparison. Jarkko R

Surachate scores appointment to Police committee, as a civilian