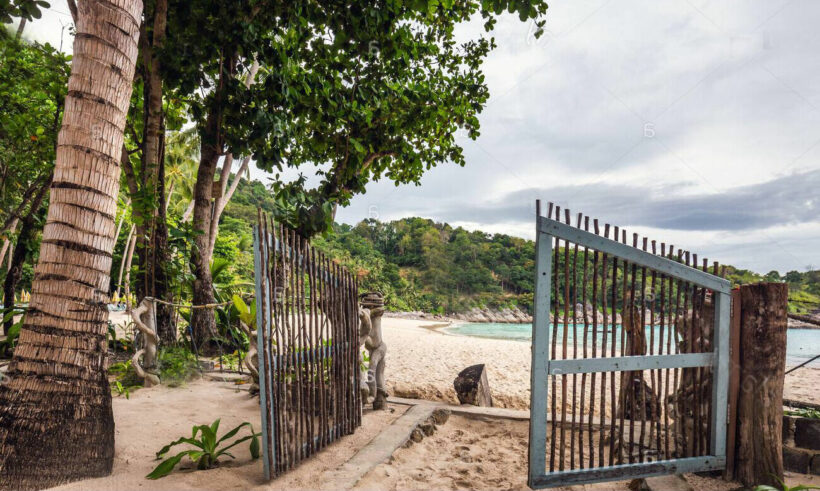 Nearing the 10 day countdown to the Phuket sandbox and it couldn’t be a more important milestone for Thailand’s battered tourist industry. The official re-opening to world travellers and tourists to the tropical island in southern Thailand is a vital pilot program for the rest of the country.

This week the PM proclaimed that all of Thailand will be open again in 120 days (which puts the date mid-October from his announcement). That statement was tempered later by the caveats that the reopening probably won’t be nation-wide and provinces re-opening to tourists would have to meet the 70% resident vaccination target before opening. Still, the announcement was a positive sign that the Thai government is just going to manage their way out of the current situation, hoping the vaccine rollout will ‘kick in’ to help control the number of new cases.

On Friday the CCSA also announced the ‘Samui Plus’ plan for Koh Samui, Koh Pha Ngan and Koh Tao from July 15. More about those details in another Thaiger story today.

Since the Phuket Sandbox program was announced it has gone through various revisions with additional layers of paperwork and checks put in place. We have the latest details in this infographic published by government authorities. It is hoped that this final blueprint will be passed by the Cabinet and then published in the Royal Gazette this week. There may still be amendments to to the final details.

Importantly, overseas embassies won’t be able to publish the details, or process the necessary Certificates of Entry, until the proposal is approved and gazetted.

July 1 will indeed be the start of the Sandbox but, whilst the gates will be flung open for international travellers, it will be a slow and gradual start. On the ground, in Phuket, hotels, local businesses and tour operators are adopting a “wait and see” approach to the plan. Early arrivals will still find an island profoundly changed from the halcyon tourist-heavy days of the last decade when Phuket was geared up for a million arrivals a month.

But there’s been an enthusiastic uptake for SHA and SHA+ registration on the island. HERE‘s a link to the list which is constantly updated.

A few small things to emerge from the infographic is that travellers will be able to shift to another SHA+ hotel on the island after the first 7 days of their stay. Another piece of additional paperwork is that all travellers will need to get a letter confirming their stay at their booked hotel.

Travellers are welcome to stay less than 14 days in Phuket but they will need to depart to a foreign country from Phuket Airport. A minimum 14 day stay on the island is required before travellers can head off to other parts of Thailand.

Also, if travellers are not resident of the country they are travelling from, they will have needed to have been in that country for a minimum of 21 days before arriving in Phuket.

This week’s announcement that the Sandbox wouldn’t apply to Thais, long-term residents or diplomats arriving from overseas has been scrapped. The Sandbox arrival is available to ALL travellers from overseas, as long as they comply with the regulations and arrival procedures.

We know that all travellers over the age of 18 will need to have been vaccinated with all required doses of Covid-19 vaccine. But the vaccines will have to have been approved by the Thai FDA or World Health Organisation at least 14 days prior to their visit. HERE‘s a full list of world vaccines and their approval by WHO.

When arriving at the airport people will need to undergo a PCR or Rapid Antigen Test, at their expense. They will be required to quarantine in their room at their chosen SHA+ hotel until a negative result is confirmed.

At this time everyone in Thailand – foreigners, travellers and locals – are required to wear a face mask in public places around the country.

The infographic is light on information about tracking apps or tracking wristbands. The Thaiger is sure that travellers will be required to download an app that will keep tabs on their travels. The wristband proposal that was reported earlier this week seems to have gone quiet… we believe the option of a tracking wristband would have been an alternative for people without a smartphone only. But the ‘tracking’ issue has been lost for now.

There will be a full program about the details of the Sandbox tomorrow on Good Morning Thailand at 9am. The program is LIVE and you can send in questions and make comments throughout the program. 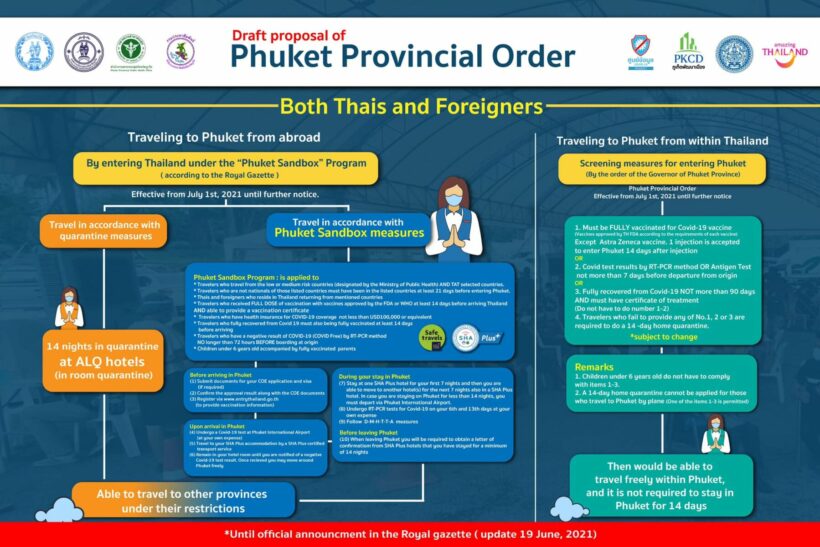 Joe
The "Phuket experiment" makes no sense on any level. While rest of Thailand has 14 day quaranteen for both vaccinated and non vaccinated tourists? Does the Thai government totally ignoring science?! What's wrong with them? Sounds to me that no…

JamesE
17 hours ago, skytrooper70 said: Next, we’ll need the airline to provide a confirmation letter, I suppose. This is already a requirement for the COE. The sandbox just exchanged the term "letter" for "certificate" (which was required for ASQ entry). You…

King Cotton
2 hours ago, Zool said: I don't see tourists wanting to jump through these hoops to come to a desert island with no alcohol, to have an unpaid role in "The Prisoner". . . .  . . . There are hot…

King Cotton
On 6/20/2021 at 1:33 PM, Martin said: I feel for those Thai people whose livelihoods have been broken by this pandemic, but there is no prospect of a recovery of the Thai tourism industry until potential holidaymakers are welcomed, and…
TSS
and coming in Oct.- dictator said entry to thailand, unrestricted to those vaccinated for at least 14 days. How many restrictions will there be for that?