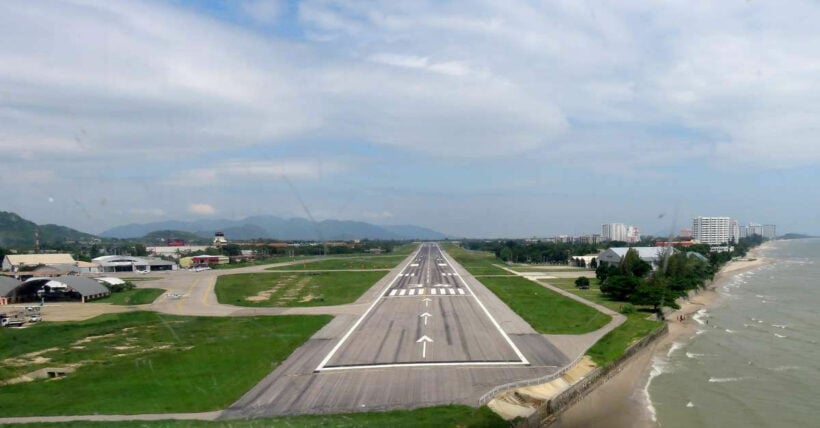 Hua Hin, long considered a bucolic backwater compared with other resort destinations in Thailand,  may be about to morph into something quite different; local media reported on Saturday that the Thai government has approved a major expansion of Hua Hin’s Airport, which could turn the sleepy resort town into a genuine international tourist destination rivalling other more established destinations in Thailand like Pattaya, Phuket or Chiang Mai.

The 350 million baht expansion comprises two projects, with 250 million baht being spent to extend the runway in order bring it up to the standards required for larger aircraft, and another 100 million to be spent extending the passenger terminal.

The project is expected to take 2-3 years, and when complete will enable Hua Hin to welcome not only more domestic flights but also international flights from destinations like mainland China, South Korea, India and Hong Kong, as well as other locations across Southeast Asia. Officials say a fully operational international airport will be a huge boost for Hua Hin’s economy and neighbouring Phetchaburi province.

Under the new plans, Hua Hin Airport’s runway will be expanded by up to 45 metres to accommodate larger aircraft, and the parking area for planes will also be expanded. Currently the airport has capacity for two B737s, but when the improvements are complete it will have capacity for up to five B737s at any one time.

The airport terminal will also be expanded three times its current capacity. The present structure can handle only 300 passengers an hour: this will be trebled to 900 passengers per hour.

The expansion of the airport is a major part of measures to develop the Thai coast from Hat Chao Sam Ran in Phetchaburi south to Chumphon.

The initiative to transform the coast has been dubbed “Thai Riviera” project – with the aim to the coastline becoming an alternative to more established tourist areas like Phuket in the south and Pattaya on the Eastern Seaboard.