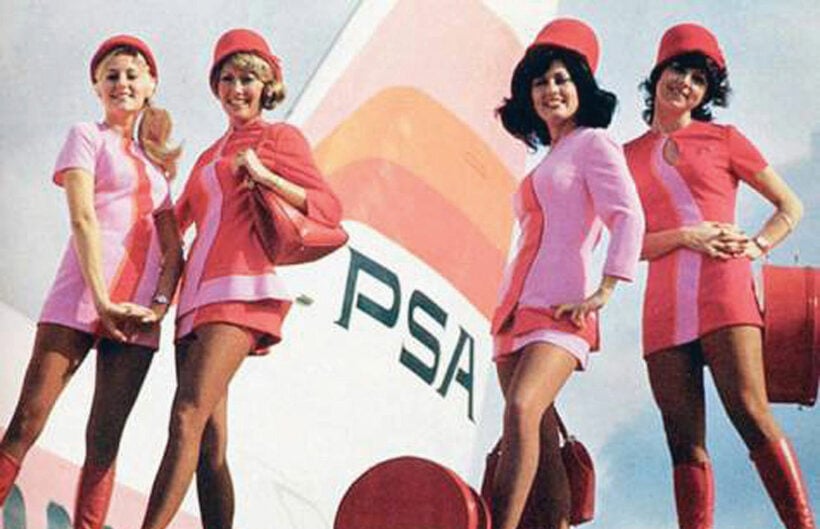 PHOTO: Groovy air-hostesses from the late 1960s when flying was more glamourous. “Now everyone can fly” and that’s brought us to where we are now.

There used to be a time when flying was a pleasure, an expensive pleasure. The passengers were part of the ‘jet-set’, and they could smoke cigarettes and sit in wide, comfortable seats. They would dress up because it was ’special’.

It’s no longer special. In fact it’s really much of a drudge these days as the modern airline travel is more like sitting in a thin aluminium flying bus, than a magical flying machine. The pleasure has gone, the fares have dropped dramatically and now ‘everyone can fly’. It’s become a business and you are merely an entry on the account ledger.

Security and queues are now just a fact of life for the modern traveller. Urrggghhh.

But some of the conventions of modern flying are just plain silly. When you book your flight you either get to choose your seat or have one allocated for you when you check in at the airport. No matter if you get on board first or last, you’ll be sitting in the seat allocated to you.

At some airports, and especially with some of the low-cost airlines, you may end up with a short bus trip to your aircraft as the airline chooses not to pay for an air-bridge or traffic at the terminal means there are no gates left at the time. Either way, the bus trip is a real turkey-shoot as to which order you’ll arrive at the actual plane. If you’re not in the first bus you’re not going to be first on the plane. Yes, a priority boarding seat may allow you to get onto the plane first – whoopy doo! You’ll arrive at your destination at exactly the same time.

Of course priority seating often comes as a perk for a more expensive fares along with other nice add-ons which some fliers prefer.

But, some airlines proudly offer this ‘service’ as a one-off benefit, for a price. And people pay for it. Go figure.

Really? You need to be shown how to fasten a seat belt. You’ve navigated your way through seventeen cheap airline websites and been able to figure out a credit card payment, AND found your way to the airport. But you don’t know how to snap a seatbelt in place?

Flight attendants must wince every time they hold the demo-belt above their head and ‘snap’ the two pieces into place during the safety demonstration.

What did you do in the car on the way to the airport? Stare at that think hanging on the seat and the buckle tucked away on the other side and wondered what they do? 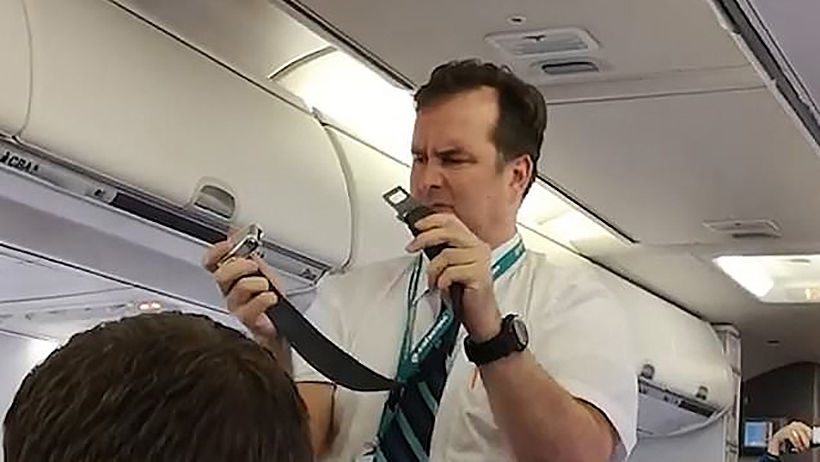 “Please ensure that you’re mobile phone is switched off.”

Since mobile phones became a thing airlines and aircraft manufacturers have been trying to reconcile if the mobile phone signal can do anything to disturb the workings of the electronic and communication systems on the airplanes.

IF there was any possible reason that, indeed, the operation of your phone and the signals it emits could do ANYTHING to affect the workings of the aircraft, you would have them confiscated at the gate and that’s that!

As it is, when asked to turn the phones off, many don’t. Me, I’ve often just forgotten to turn it off and realised it was on all the time sitting in the bottom of my bag. The plane still managed to arrive at its destination.

Of course you should always comply with the instructions of the well-trained cabin attendants in their spiffy uniforms. I suspect there’ll be a day when turning off your mobile phone will be a thing of the past. 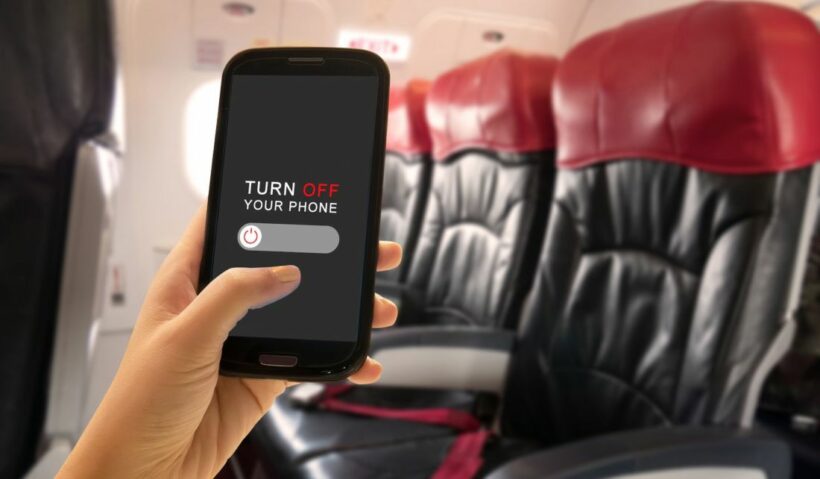 The compulsory aircraft safety demonstration is little changed over the centuries. Some airlines have tried to sex it up a bit recently with celebrity video versions. The idea here is to get you to laugh whilst being bored sideways, instead of just being bored.

The bottomline is that the VAST majority of passengers will never need to know any of this information. And if the air masks drop from the locker above that will usually mean there is some sort of severe turbulence or cabin depressurisation whereby not a single person will be casually reaching for the mask and wondering if the bag is inflating or not. You’ll likely be just another of the screaming, terrified passengers shitting themselves.

Ditto for making sure I have the “tab safely secured around my waist” if I need to put on a life jacket. As for the whistle to ‘get attention’, I’ll be blowing on that bit of plastic LOUD AND CLEAR.

Has anyone ever bought anything at an airport duty free store, for less than you can get it outside the airport or online? If so, tell us what it was and which airport so we can witness the miracle first hand.

Certainly in Thailand, Duty Free is a cynical scam that nets the AoT (Airports of Thailand) billions of baht in profits every year. And not much less for the airport vendors, King Power. Guess who’s getting the good deal? It isn’t the passenger.

No one ever flew on a plane because of the food. No one. There was a time, a LONG time ago, when your meal actually came on a plate with a stainless steel knife and fork. Those days are long gone (unless you’re up the pointy end of the plane) and now we have to put up with a stale sandwich, a piece of cake or nothing at all. If you fly on many of the discount airlines they actually have a menu and you can choose what you want, or don’t want, to eat (which I prefer).

Or take your own. Many airlines frown on people taking their own sandwich but I’m yet to hear of a passenger thrown out of the plane for this transgression. 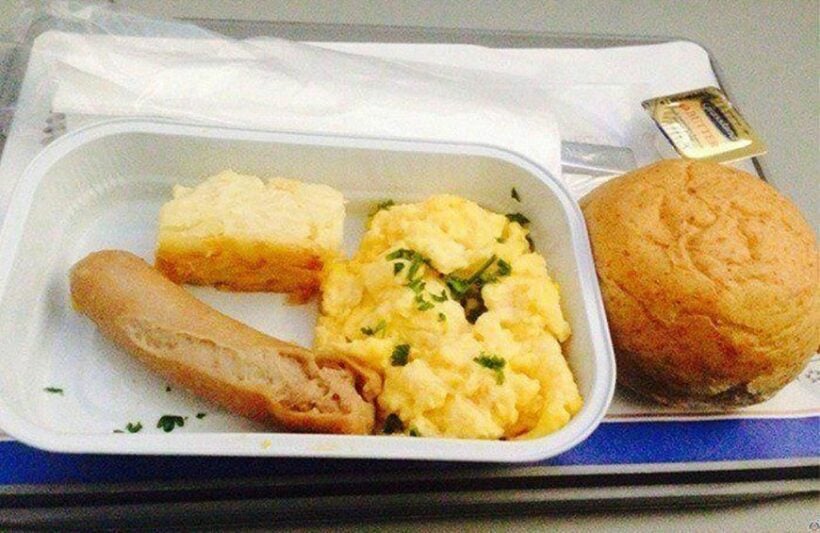 If you’re sitting on any of the single-aisle smaller jets like the Boeing 737 or Airbus A320, the workhorses of all airlines for short-haul routes, then you are going to be sitting in almost the same seat, no matter what the airline. Of course, if you’re flying business or premium, or sitting in the front or an exit row, you will have more leg room.

Some of the larger planes have ‘slightly’ wider seats and the new Airbus 220 aircraft actually DOES have wider seats. But most of the time you’re packed in the same sardine can on the same seat.

Airlines are run by accountants and the bottomline means packing in as many seats as possible. There may be an inch here or a centimetre there, but the seats in economy are going to be much of a muchness. As far as the width of your seat is concerned, in the B737 and A320s, they are all exactly the same because the planes are the same width and there are six seats across. No fancy maths will make your seat any wider, no matter what the airlines tell you, or how you ‘feel’. You’re sitting in much the same seat, get over it. 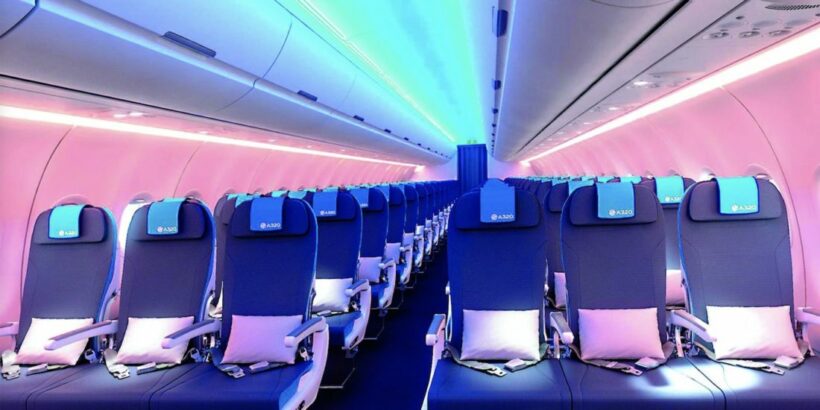 The plane has come to a stop. Quick, stand up immediately and open the overhead lockers.

And then wait for 5 minutes whilst the air bridge is brought across to the plane and the crew go through the process of opening the doors.

Apparently, you MUST stand up as soon as the plane comes to a stop at the arrival gate. Suddenly there are 100-200 people all standing up in the aisle. Waiting.

Perhaps it is a good idea to just wait until people forward of you have gotten off the plane then, when your turn comes, get up, grab your bag, and walk off the plane. 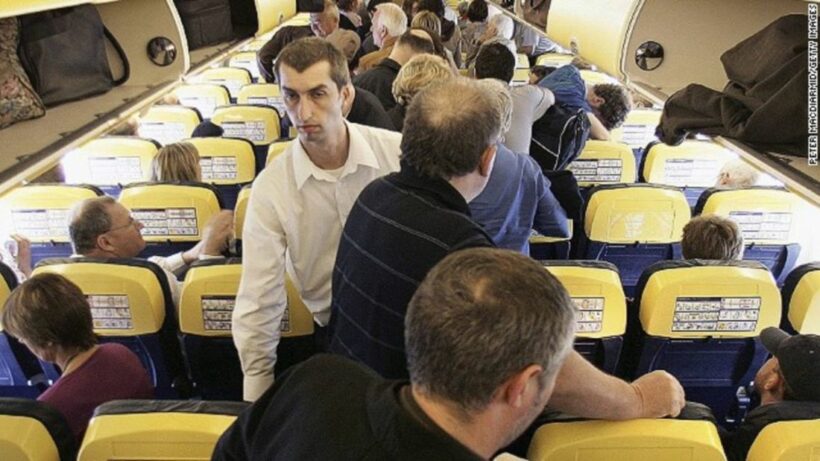 Leave something behind? Man forgets finger in Chinese taxi after dash to hospital