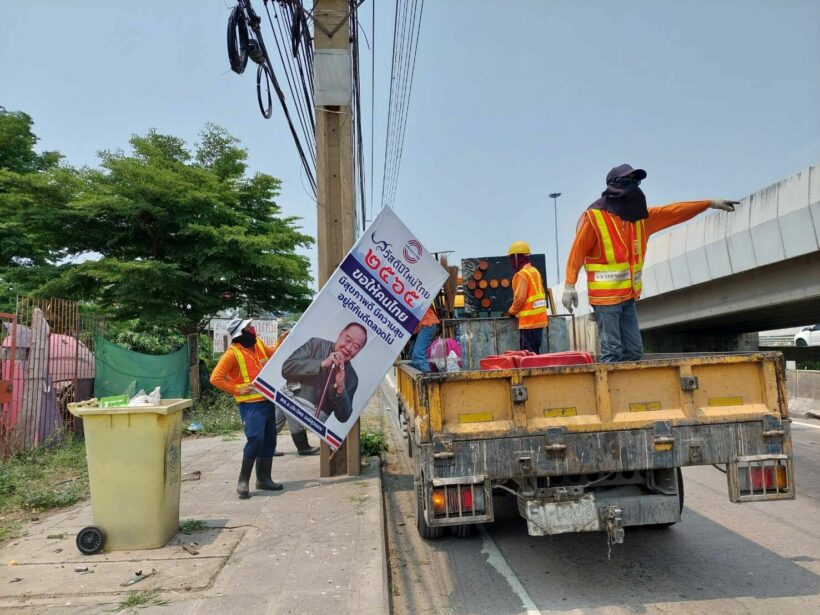 Thailand highway officers in the central province of Saraburi have been busy removing Songkran holiday banners from Deputy PM Prawit Wongsuwan on Tuesday. The officers said the banners, adorned with the smiley face of the 76 year old Deputy PM and party powerbroker, were not approved to be installed along the roadside and might annoy drivers and cause accidents.

Aside from the banners from various candidates campaigning for the post of governor in Bangkok, drivers who travel during the Thai New Year might see Songkran banners or even a billboard with a picture of the the Deputy PM popping up along Mittraphap Road, aka. the “Friendship Highway” or “the Road to Isaan”, it connects Bangkok to provinces in northeast Thailand, ending at the Laos border. The illegal banners spread the holiday wishes of the Deputy PM, saying…

After the banners were installed, Thai media asked the Deputy PM, “Are the banners related to any political campaign?” Prawit insisted that he didn’t want to gain any support for his party or any political campaign (a general election is coming up in the next 12 months) he just wanted to spread happy Songkran wishes to travellers as they make their way to Songkran celebrations.

Today, the official Facebook page of the Saraburi Highway District shared pictures of officers removing the Deputy PM’s banners from an electric pole. The caption read…

The banners were attached without permission. But Thai netizens question whether the “authorities” asked permission before removing them.

The ubiquitous election banners are all the same cheap vinyl print with a flimsy 2 x 2 centimetre stick frame and then, usually, a single piece of wire to attach them to just about anything along the side of the roads.

HolyCowCm
He certainly was trying to spread something. But it wasn't holiday cheer.