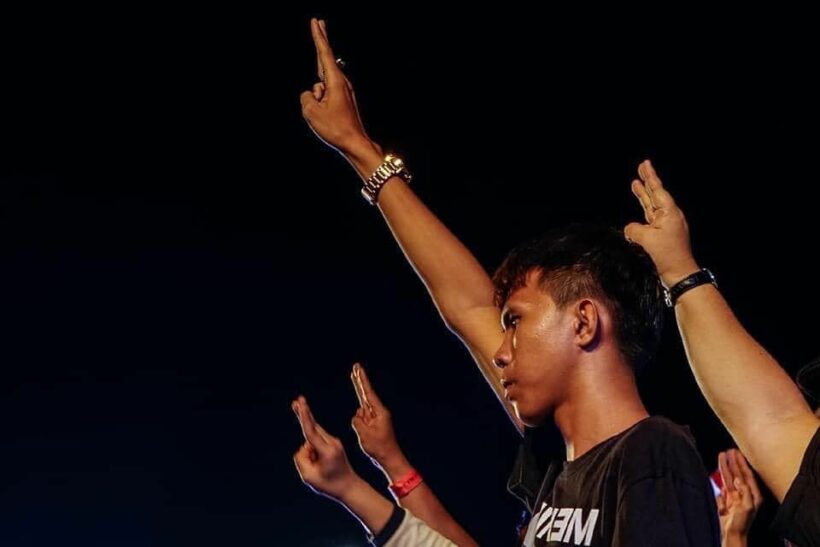 A political rapper known as “Elevenfinger” has become the main suspect in the bombing that happened at Prime Minister of Thailand Prayut Chan-o-cha’s residence on Sunday. The rapper was pictured with the group of motorcyclists who approached the gates of the PM’s residence and threw a bomb, which exploded on the lawn opposite the house. The rapper was arrested today for illegally possessing explosives after police found explosives inside his bedroom, but he insists it wasn’t him who threw the bomb. The rapper has since been released on bail while the investigation into the case is ongoing.

On the same day of the bombing, “Red Shirt” protestors burned a coffin covered in pictures of PM Prayut’s face at the Democracy Monument in Bangkok. The protest was to commemorate the 12th anniversary of the Red Shirt protests that claimed the lives of 90 people in 2010.

Elevenfinger was pictured riding a motorcycle with his friends riding towards the gates of the 1st Infantry Regiment in Bangkok where PM Prayut resides on Sunday. However, the 20 year old rapper, also known as “Book”, or formally as Thanayut Na Ayudhya, insists he wasn’t the one who threw the bomb. He said he was just tagging along on his way to the protests at the Democracy Monument on Sunday where he planned to play music.

Police searched the rapper’s residence, where they found more than 100 explosives inside his bedroom, including fireworks, grenades and black smoke bombs. Elevenfinger was arrested for illegally possessing explosives today and was taken to Bangkok South Criminal Court. Initially, the court planned to detain him from April 12 – 23 to investigate six more suspects in the case. However, Elevenfinger’s relatives requested to get him out on bail. The request was approved and he was released this afternoon. If he breaks the conditions of bail, he will be fined 100,000 baht.

The rapper, born and raised in the Khlong Toei District of Bangkok, has released various political songs criticising the current Thai government, including one song entitled “Padetgan”, or “Dictatorship”. In 2020, he was arrested for joining anti-government protests on July 18.

The investigation into the bombing of PM Prayut’s residence is ongoing.

Poolie
34 minutes ago, Prosaap said: But they find exposives and he come free on bail only in thailand what you need to do before they keep you in jail other then being a farang Ho I dunno, perhaps nick someones…