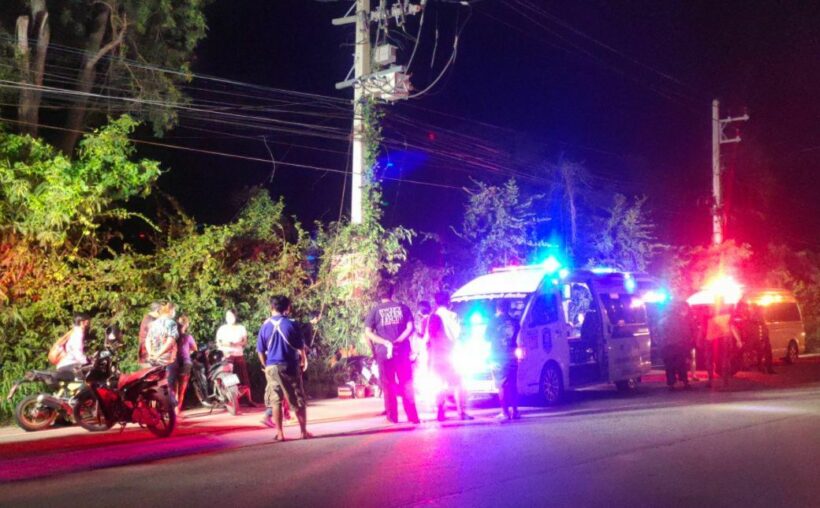 A 26 year old woman from Chiang Rai died in an accident when her motorbike crashed into a power pole in Bang Lamung late Monday night. The Nongyai Police received word of the accident at around 10:45 in the evening.

They arrived along with emergency responders at the crash site at Soi Chaiyapruek 1 in Huayyai. The woman was found with her damaged motorbike nearby and was eventually pronounced dead at the scene of the accident.

Police noted that she had not been wearing any sort of protective motorcycling helmet at the time of the crash.

A local security guard was stationed in the security box of a housing estate near the site of the accident. He reported hearing crashing sounds and racing over to where he heard them discovering the motorbike accident and calling the police for help.

The exact cause of the crash is not known at this time but local police are checking the CCTV footage to try to find any clues or details about the motorbike accident.

The young victim’s older sister came to the scene of the crash after First Responders alerted her of the crash. She told police that her sister I’ve been at her house that night and was just driving her motorbike from that house back to the victim’s home where she lived with her boyfriend when the accident occured.

ThailandRyan
6 minutes ago, Bob20 said: Unless you have a white face of course... Even then it seems to only be done in the tourist areas from what I have seen, unless it is the speed enforcement done by camera, for…
Saunk
Comments complaining about laws being enforced? How about individuals take personal responsibility of their health and do what's best for them.  If the young lady chose to wear a helmet, odds are she would still be alive, it was her…
Far-Q2
Isn't the most important issue in this news item the fact that a young woman has lost her life?  So sad. RIP.