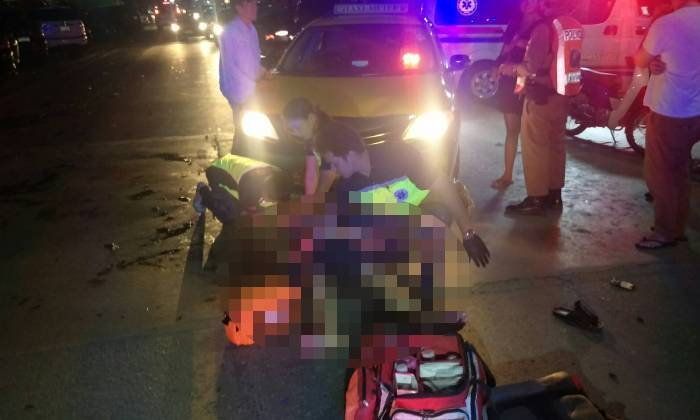 An American pedestrian has died after being run over on Klong 1 Road leading to the Lumpini Township condominium, north of the Capital. Police and emergency services responded after reports that a foreigner had been struck by a motorcycle just after midnight this morning.

Volunteers from Ruam Katanyu provided CPR to the man, reported by Sanook as 35 year old ‘Carl’ from the US, but he died at the scene. A taxi, with a smashed front and a registration plate laying on the road, was driven by 56 year old ‘Natthapong’ who was waiting for the police to arrive.

A 24 year old witness told police the she was walking with two foreign friends and the victim. They were crossing the road on their way to get something to eat and the victim was leading the way.

One motorcycle stopped to allow them to cross but another did not and slammed into the man who then fell into the path of the taxi. The rider of the motorbike fled the scene. The witnesses say they weren’t able to remember the type of motorbike or the number plate.

The taxi driver explained that he had just dropped off a passenger at the condo and was on his way to Rangsit when he saw the motorcycle hit the man crossing the road.

Security tight for the first day of the new Thai parliament