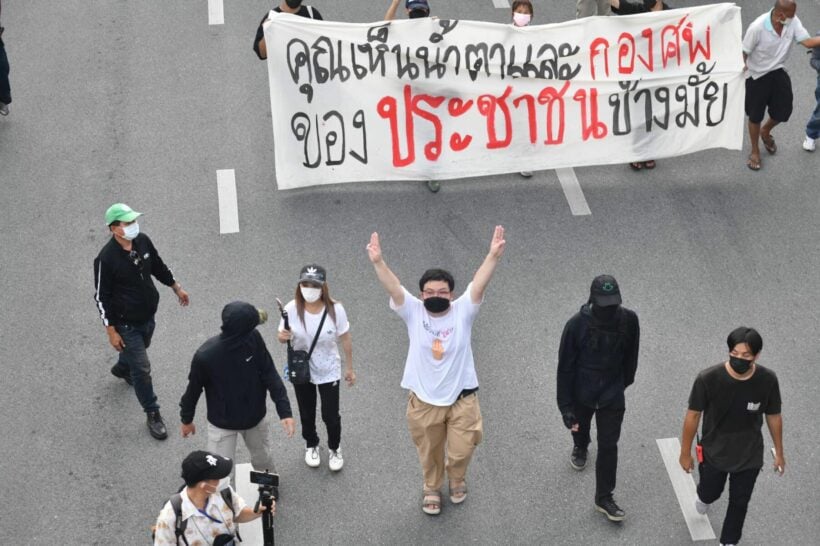 A confluence of protesters merged in Bangkok today as multiple causes overlapped and demonstrated at Government House. Several groups protesting the government and calling for the dissolution of the Senate and the resignation of PM Prayut Chan-o-cha crossed paths with those that were rallying against the handling of the Covid-19 pandemic and the lack of assistance for many sectors desperately in need of financial relief.

The conglomerate met up and marched from the Uruphuong intersection to Government House last night and all took part in a peaceful protest and a flea market laden with symbolism. The march to Government House began around 4 pm and the pro-democracy protesters were led by Parit “Penguin” Chiwarak who was recently released from prison on the condition that he does not take part in political activism.

The group protesting the lack of government assistance during Covid-19 gathered local entrepreneurs complaining against the repeated closing of dine-in restaurants and the frequent ban on alcohol sales at nightlife with the most recent closure lasting 3 months already. Groups from the entertainment industry, alliances of musicians, and even various sex workers have banded together over the past week to push for some sort of financial assistance or the reopening of their businesses.

The two groups converged and marched towards Government House even though police had barricaded roads with traffic fences and even barbed wire. In preparation for trouble, Gate 5 of Government House, which sits opposite the Ministry of Education, released 3 trucks for gathering arrestees, and 2 high-pressure water cannon trucks. Human rights organizations have recently called into question whether the government is adding chemical irritants to the water in the cannons.

After gaining momentum in their march to Government House, the protesters were thwarted by heavy rains around 5:30 pm which thinned the crowds and hampered the planned speeches, though Penguin persevered and finished his speech in the rain. After the downpour, people regathered and continue to peacefully protest.

Those demonstrators from the closed food and beverage businesses set up a flea market in front of the government building to sell their food and wares. The markets helped them earn a little desperately needed income but also served as a symbol demonstrating the simple living that government restrictions had denied them the ability to make.

Royal Thai Police call the demonstration and the flea market a direct violation of the emergency decree to protect Bangkok from outbreaks during the Covid-19 pandemic. The current restrictions don’t allow gatherings of more than just 20 people so the protesters converging at Government House were breaking the law. But while police kept a close eye on the events, there been no reported arrests or charges filed.