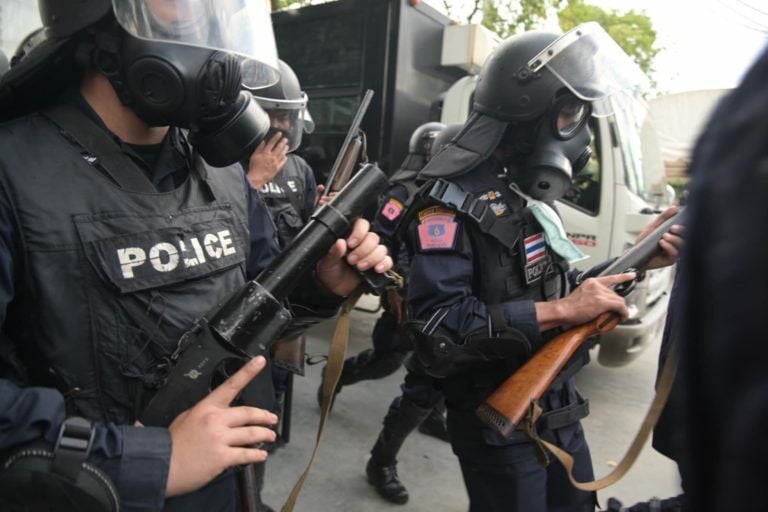 Nearly a week after demonstrators clashed in Bangkok, police and defense ministry spokesmen say they have no idea who the 40 men were that appeared alongside riot police officers. The men, who donned military-style buzz cuts and civilian clothing allegedly assisted security forces during the crackdown on protesters.

At first, police spokesman Yingyot Thepchamnong denied that the men were even there, but then changed his tune after a reporter pointed out that there were photographs and video of the mysterious men. Now he says he isn’t sure what group the men belonged to.

“Those 30, 40 people who assembled, I have no idea either which group they belonged to. But we are investigating. According to our protocols, the people in charge of the crowd control operations would wear uniforms when conducting their duties in order to avoid any misunderstanding. There were also some plain-cloth officers, but they were usually scattered around the demonstration area.”

The men stood in 2 organised lines just behind the riot police during a confrontation with demonstrators in front of Grand Palace with most wearing white-coloured construction helmets. The men presented no identification documents and police made no attempt to have them leave the scene.

Defense Ministry spokesman Kongcheep Tantravanich also denied in a phone call that the group of men were connected to the armed forces.

“We are not related to them at all. You have to ask the police.”

But many protesters believe that the men belonged to the authorities as they say they saw similar unidentified men working closely with security officers at past demonstrations. The men even earned the nickname as “Minions” after the cartoon character.

Police reform activist Somsri Hananuntasuk says this method of deploying unidentified men in civilian clothes is not in line with international standards of crowd control.

“Why wear casual clothes? Why not clearly identify themselves to the public who they were? There was no need for plain-cloth officers at all, unless you want to infiltrate the protest and blame the demonstrators when there was violence.”

Nonviolence advocate Gothom Arya also voiced his concerns over no one seeming to know who the men were. He is asking authorities to come clean about their agents involved in the protests.

“If there were security officers in operation, they must identify themselves as such. Police must have an answer. They can’t just deny knowledge of the men. If they were in the area, police must know which side they belong to.”

12,000 police officers to be deployed at pro-democracy protests this weekend