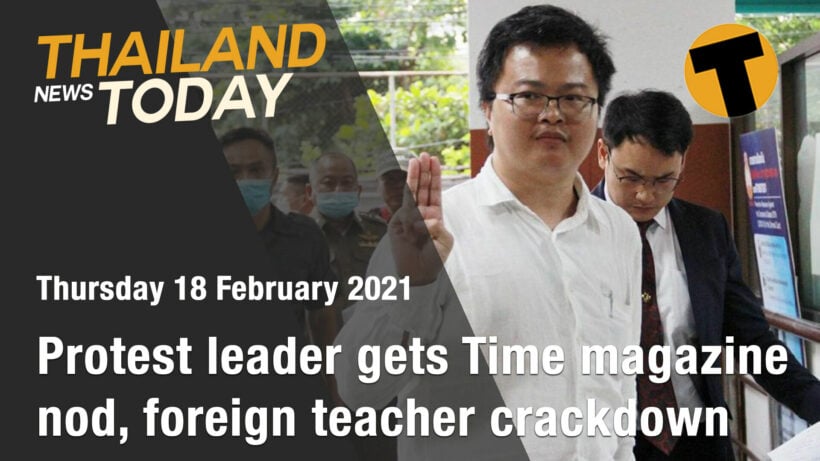 A prominent protest leader and human rights lawyer in Thailand, who is currently in court detention, was named in Time magazine’s “Time 100 Next” as an influential leader, calling him “the lawyer who broke the silence around Thai Monarchy.”

Traders at 2 wet markets in the central province of Pathum Thani, just north of Bangkok, have expressed their frustration at the decision to keep the markets closed another week, until next Thursday. The Pornpat and Suchart markets, in the Thanyaburi district, have been closed since last Friday and were supposed to re-open yesterday. However, officials have extended the closure in response to a number of new Covid-19 infections.

Thailand’s Ministry of Labour is cracking down on foreign teachers who may be working in the Kingdom without valid work permits. The ministry has instructed the Department of Employment to apply stricter criteria when issuing work permits to foreign teachers.

The American clothing brand Supreme is under fire for using an image of a revered monk as well as several Buddhist “yant” designs on a line of shirts they’re calling “Blessings Ripstop Shirt.”

Thailand’s National Office of Buddhism says they plan to submit a letter to the clothing company for using the image of the well-known and respected monk without permission and to explain why the use of the image is inappropriate.
In addition to reaching out to the clothing company, the office will also ask Thailand’s Digital Economy and Society Ministry to investigate the images of the shirts shared online.

A quarantine hotel in the eastern province of Chon Buri is threatening legal action after a Thai returnee lambasted the facility on social media. It is the second Thai hotel to appear hyper-sensitive to criticism. In October 2020, a hotel on Koh Chang threatened to sue an American guest if he did not apologise for a negative TripAdvisor review of the property.

12,000 police officers to be deployed at pro-democracy protests this weekend