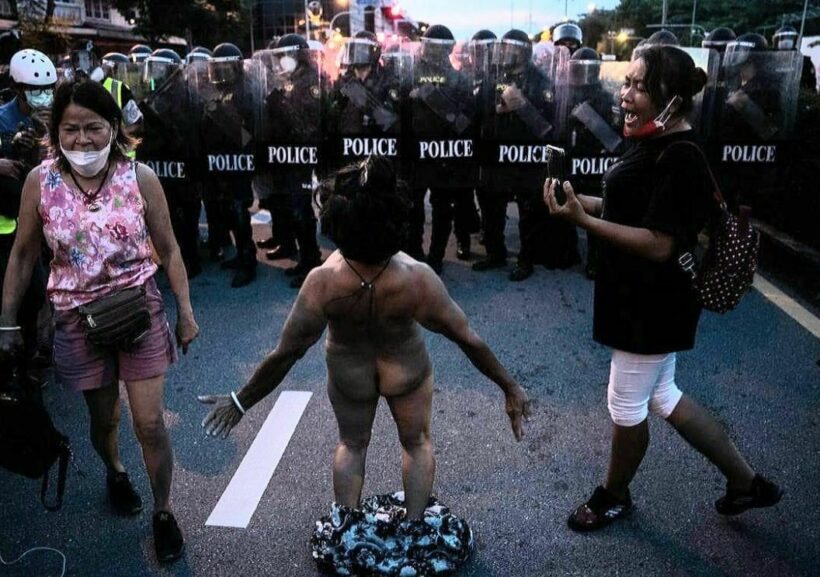 Anti-government protests have escalated in recent weeks and have begun to resemble a Hollywood movie, full of conflict and drama and explosions, and now… nudity? Among the arrests and charges of protesters stemming from yesterday’s demonstrations at Nang Lerng intersection orchestrated by the Talufah group, police say one woman faces charges of indecent exposure for stripping naked in protest.

The woman known as Pa Pao disrobed in the middle of the demonstration and said her naked protest was meant to highlight the mistreatment of protestor by police and prosecutors. She could be charged up to 5,000 baht for exposing herself in public according to the Criminal Code.

9 more protesters were arrested as they tried to get through a barricade guarded by razor wire in order to get to Government House. They fought with anti-riot police, adamant in their goal of reaching the building and demanding the resignation of PM Prayut Chan-o-cha along with reform for the monarchy and a new constitution written by the Thai citizens.

Meanwhile, protesters were accused of rampaging in a separate demonstration by the more hardcore Talugas group later in the evening yesterday. Protesters in Din Daeng had been using firecrackers, flares, slingshots, and pipe bombs to battle the police forces using rubber bullets and tear gas. But yesterday they were seen to be throwing Molotov cocktails at police and fire damage to property in the area was extensive. 2 police cars were fully burned out while 6 more sustained some level of fire damage.

The deputy commissioner of the Metropolitan Police Bureau said that after consulting with other law enforcement agencies, police will escalate legal punishments to deal with more violent protesters.

Of the 878 protesters on the police’s most wanted list, 633 have been arrested already. They expect protests to continue at both Din Daeng and Nang Lerng and plan to push back on them with more arrests expected.

Greeneyes
It was reported 47 police officers were taken to hospital after being hit by Ping Pong balls.  A police spokesman said they believe the culprit to be a disgruntled Phuket sex worker protesting against covid restrictions.
CamPat
Nothing to worry about. In western countries women use this kind of exposure as the ultimate lethal weapon against men.  Femen is one of the worst and hopefully this kind of "feminazi killerweapon" will not take root in Thai Culture.…

PapayaBokBok
17 hours ago, TiT said: I thought you were into aunties?  👩‍👦 Nah Im all about the Isaan Grannies at the massage shops...be gentle granny..kop khun krup

billywillyjones
On 9/30/2021 at 10:56 AM, Greeneyes said: It was reported 47 police officers were taken to hospital after being hit by Ping Pong balls.  A police spokesman said they believe the culprit to be a disgruntled Phuket sex worker protesting…

Police arrest man believed to have shot teenager at protest