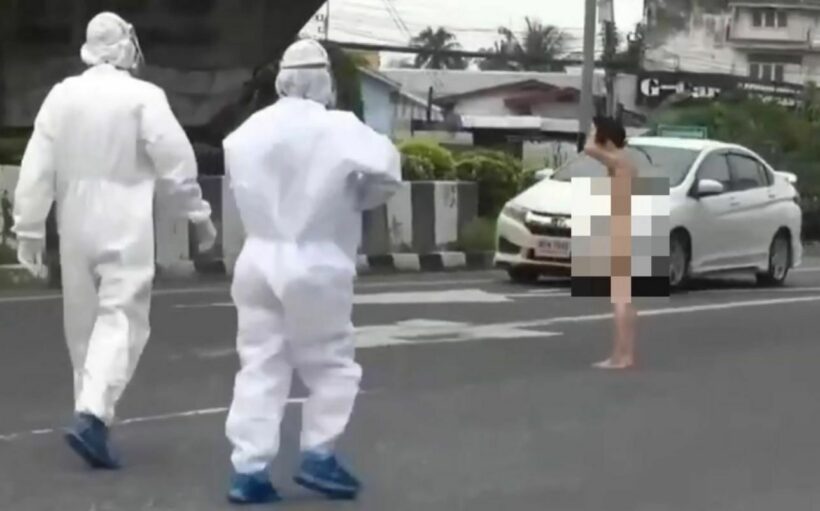 PHOTO: a naked woman stopped traffic for an hour in Chon Buri. (via Pattaya News)

Traffic on Sukhumvit in Chon Buri this morning was interrupted in a bizarre commotion involving an erratic naked woman running around the road. At around 7:00 am officers from the Saensuk Police Station and rescue workers arrived at the scene after the incident was called in. The naked woman yelled at people to stay away, claiming she was infected with Covid-19.

The woman was identified as a local resident of Mueang district where the incident took place. The 58 year old woman was said to be “extremely uncooperative” by officers and rescue workers on the scene at the time.

A witness to the accident described what happened, though the first-person testimony did little to make the incident less bizarre. The witness said that the incident started with a fender bender on Sukhumvit road in Mueang when a pickup truck and a sedan collided, though it was not specified who was at fault. But the woman emerged from the sedan agitated and apparently naked.

It is uncertain at this time if the woman was driving completely nude or if she took off her clothes immediately after – or, for some reason, because of – the car accident.

The woman appeared to have been set off because of the accident and went into a rage, running naked around the street, shouting and screaming at people. It took police and rescue workers about an hour to take the woman into custody. Officers had to suit up in full PPE gear in order to capture the belligerent woman, after her claims of having Covid-19.

The naked woman was taken to a local hospital to determine her condition and test her for Covid-19. Meanwhile, her relatives are being contacted to try to gain insight on if the woman has any history or background of mental health issues.

DoUKnowWhoIAm
8 hours ago, JackMeOff said: What is so strange about this story? Many naked ladies in Pattaya... Ohhh... I just reread the story. I know now. She is 58 years old 😅🤣😂😆😁😄 So she might be one of the younger…

PapayaBokBok
Is a marketing gimmick to get the sex tourists back to LOS?   :)   Also is she single?  Member of thai friendly?

AdvocatusDiaboli
Should also check her membership to the Pattaya Beach Nudist Club …. May just have got lost with all that water around the streets, may think she’s at the beach.