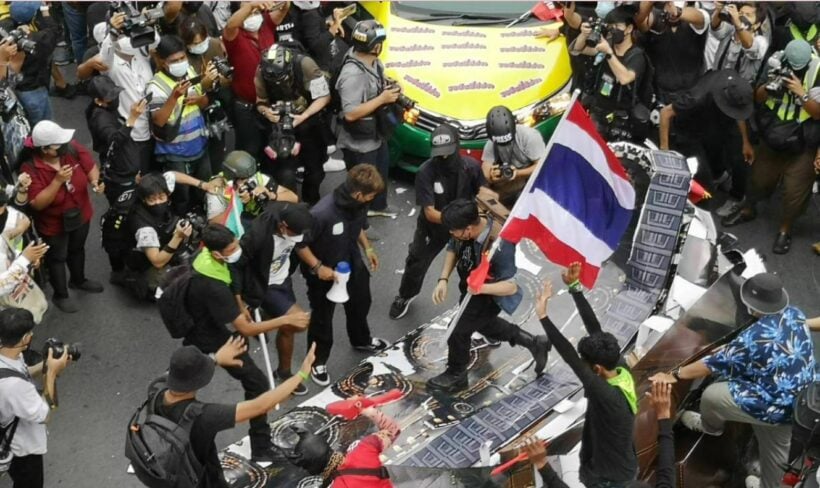 PHOTO: A car mob and symbolic flattening of a tank marked the 2006 coup anniversary (via BKK Post)

A massive car mob of protesters numbering well over 1,000 vehicles braved the heavy rain to call for the prime minister’s removal and to commemorate the 15th anniversary of the coup that began the trend of military control over Thailand. This latest in a continuous succession of protests against the current leaders of Thailand marks the anniversary of the coup on September 19, 2006, that knocked Thaksin Shinawatra out of power and was a precursor to the 2014 coup that brought PM Prayut Chan-o-cha to power.

Redshirt activists drew parallels and connections between the two coups that happened 8 years apart saying one set the stage for the other and that the coups pretend to solve government conflicts but really just act as a path for military leaders to move into government power.

Estimates of 500 cars and over 1000 motorcycles started at Asoke intersection and caravaned over the Krungthep Bridge to Thon Buri before doubling back to end the day at Democracy Monument. Red-shirt leaders said that the battle against the Prime Minister and those in power was a long fight but today’s huge show of protesting force sends a strong and clear message to leadership that military coups and the leaders that result from them should become a thing of the past.

They pointed to the size of the turnout as a show of passion in the face of the heavy rain as well as the Covid-19 pandemic restrictions that forbid large groups, thus preventing large-scale gatherings of an even bigger proportion.

The event kicked off by marking the coup anniversary with powerful symbolism in a homage to a taxi driver in 2006 who painted his car with anti-coup slogans and then ploughed into an army tank. The protesters constructed a cardboard tank and Red-shirt leader Nattawut Saikuar dressed in a taxi uniform and drove a taxi into the faux tank.

Protesters looked on while chanting calls for PM Prayut’s resignation before joining in to stomp the cardboard taxi flat in a show of defiance against military rule on the anniversary of the 2006 military coup.

billybob
10 minutes ago, Stardust said: Yes he is a chinese dictatorship supporter. He is writing pro junta , pro China, pro North Korea also in other forums and against democracies against the Hong konger who want keep their democracie. And…
Stardust
1 minute ago, billybob said: They are paid shills for pro-China propaganda like this joker.  Yes same but he is a chinese

billybob
12 minutes ago, Stardust said: Yes same but he is a chinese No he is a US citizen who fought in the marines apparently.  https://www.khaosodenglish.com/politics/2020/11/04/conspiracy-blogger-tony-cartalucci-reveals-his-identity/