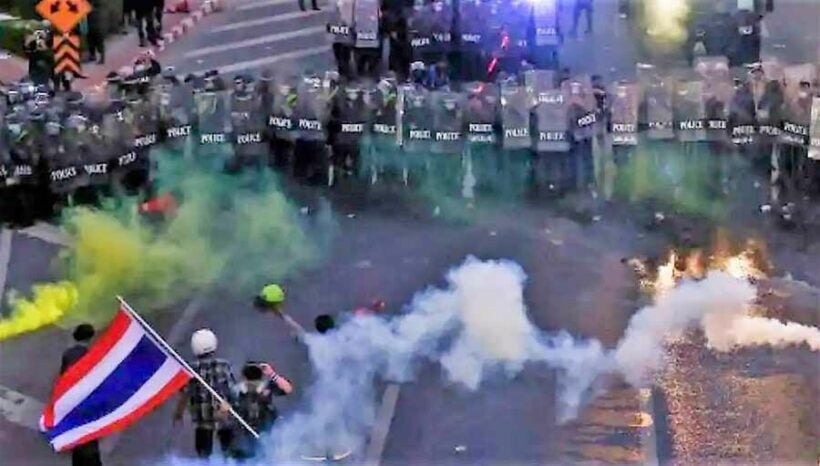 The Thai PM, Prayut Chan-o-cha has defended police action against protesters taking part in Sunday’s anti-government rally in Bangkok. Officers from the Metropolitan Police Bureau used tear gas, water cannon and rubber bullets in an effort to drive protesters back from the PM’s residence at the 1st Infantry Regiment barracks, King’s Guard. The PM insists the actions were in line with international standards.

“I insist the crowd-control measures were in accordance with international standards and police did not violate the protesters’ rights.”

The PM has also criticised some media outlets for their reporting of the rally, claiming they only focused on officers’ use of force against protesters. 33 people were injured at the rally – 23 police officers and 10 protesters. One police officer, named in a Bangkok Post report as Wiwat Sinprasert, died of heart failure. 22 protesters have been arrested, 4 of whom are minors who will have their cases heard in the Central Juvenile and Family Court.

Phukphong Phongpetra from the MPB says the use of rubber bullets was necessary in order to stop things getting out of control. He says protesters also gathered outside Din Daeng and Suthisarn police stations, where they set fire to police cars. He claims 90 officers were injured in the clashes, with 27 receiving hospital treatment.

National police chief Suwat Jangyodsuk says the measures used by police were not aimed at dispersing protesters, but rather to arrest anyone using violence against officers. He claims this latest protest was different to others, in that some activists kicked things off by attacking police officers.

“We’ve discussed it several times that we will enforce the laws where necessary. If the protesters didn’t harm officers or destroy barriers, we wouldn’t have had to act. And the protesters, they were unable to control each other.”

Opposition politicians have slammed the measures used against protesters, with Rangsiman Rome from the Move Forward Party claiming police fired rubber bullets at random and not at any particular targets.