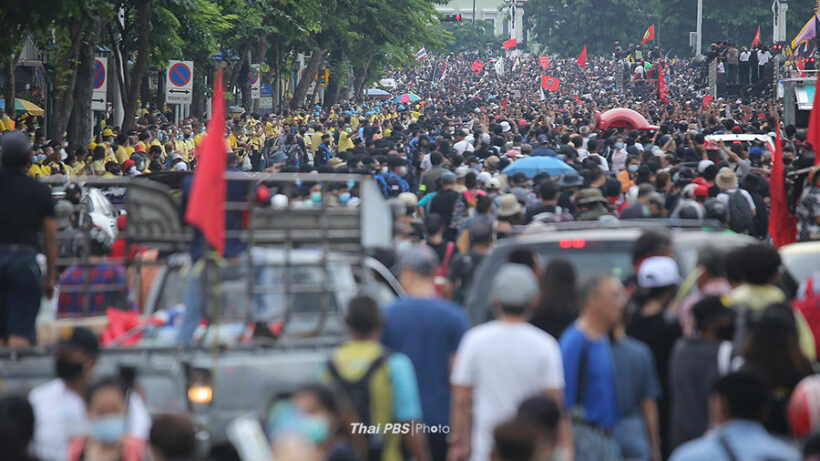 A Thai human rights NGO has criticised the government’s decision to declare a State of Emergency in Bangkok, as political unrest escalates in the capital and around the country. iLaw says the imposition of the emergency decree gives the PM the unrestricted right to use special powers that violate citizens’ human rights. iLaw points out that the new ban on gatherings of more than 5 people contravenes the country’s constitution, which allows for peaceful gatherings. It adds that so far, around 421 people have been arrested for violating the ban.

The organisation says that the decree also allows for people to be held without a court warrant for at least 7 days, pointing out that this can be extended to 30 days in areas outside of police stations. The comments come in the wake of the arrest of prominent protest leader, and human rights lawyer, Arnon Nampa, who has been flown to Chiang Mai to face charges of sedition.

Meanwhile, 6 opposition parties are adding their voices to iLaw’s, and calling on the government to lift the State of Emergency with immediate effect. The leaders of the Pheu Thai, Move Forward, Sereeruamthai, Prachachart, Thai People Power and Puea Chat parties have issued a joint statement in which they claim there is no legal justification for the imposition of the emergency decree in the capital. They are calling for an emergency parliamentary session to resolve the ongoing conflict through diplomacy, adding that they do not support the use of violence by either side.

The criticism from iLaw and opposition politicians echoes that of human rights organisation Amnesty International, who describe the imposition of the emergency decree and the arrest of protesters as, “vague, drastic order that will lead to more people unfairly arrested, detained and prosecuted.”

A rally of thousands of protesters at Bangkok’s Ratchaprasong intersection and Ratchadamri Road ended peacefully last night, but activists have vowed to return for more of the same today.