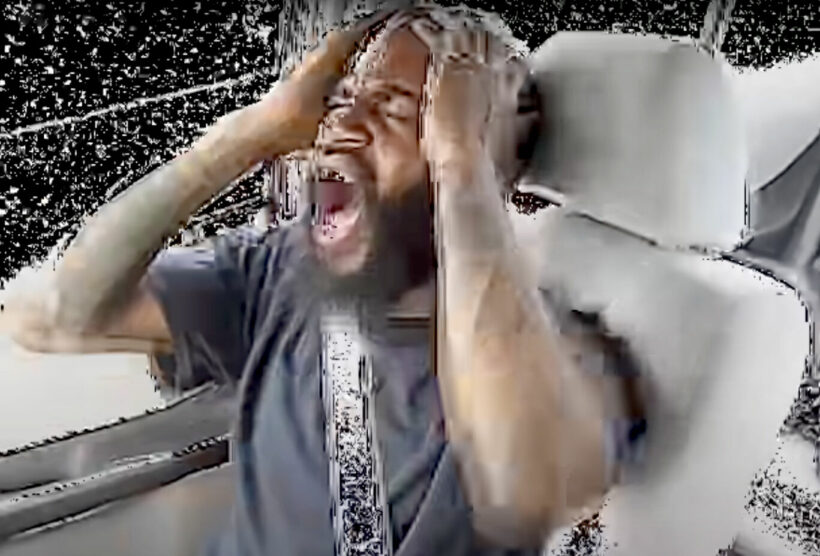 PHOTO: "Guillotine" by Death Grips was posted by hackers on the Constitutional Court website. (via YouTube screenshot)

In response to the Constitutional Court making a controversial decision that pro-democracy demonstrations, and the speeches leaders gave at them, were considered an illegal attempt to overthrow the government and monarchy, computer hackers took over the Court’s website homepage and did some redecorating.

The website was hacked and text was changed to display the phrase “kangaroo court” – a slang term for an authority without credibility that ignores rules or laws. The homepage also linked to a music video on YouTube for the song Guillotine by US-based hip-hop group Death Grips. The band hails from Sacramento, California’s capital city and the song is an experimental abrasive hip-hop track with a low-budget video featuring MC Ride shouting lyrics from a car with glitchy black and white static in the windows.

The song is relatively obscure and released 10 years ago – a curious choice for hackers to display but certain to rile tempers for advocates of the Court. The website hasn’t been restored and, as of this writing, http://www.constitutionalcourt.or.th/ is completely offline.

The hack was most likely in response to the ruling yesterday that said that speeches given by Arnon Nampa, Panupong “Mike” Jadnok, and Panusaya “Rung” Sithijirawattanakul at protest on August 10, 2020 and subsequent demonstrations are advocating for the overthrow of the government and the monarchy. They ordered the 3 activist leaders and all their followers to cease all action against the kingdom and state. While the ruling carries no immediate punishment, it can be used in other pending and future cases against activists and supporters.

ThaiEyes
All I can say is, LOL 😆

yetanother
55 minutes ago, Thaiger said: computer hackers took over the Court’s website homepage and did some redecorating. The website was hacked and text was changed to display the phrase “kangaroo court” precious
DiJoDavO
2 hours ago, Thaiger said: The homepage also linked to a music video on YouTube for the song Guillotine by US-based hip-hop group Death Grips. They had a chance to rickroll everyone there and they didn't take it!

Soidog
That is pure genius 😂😂

AlexPTY
probably designed by the same webmaster as a Thai Pass

Motorbike law breakers: report them and win up to 20,000 baht