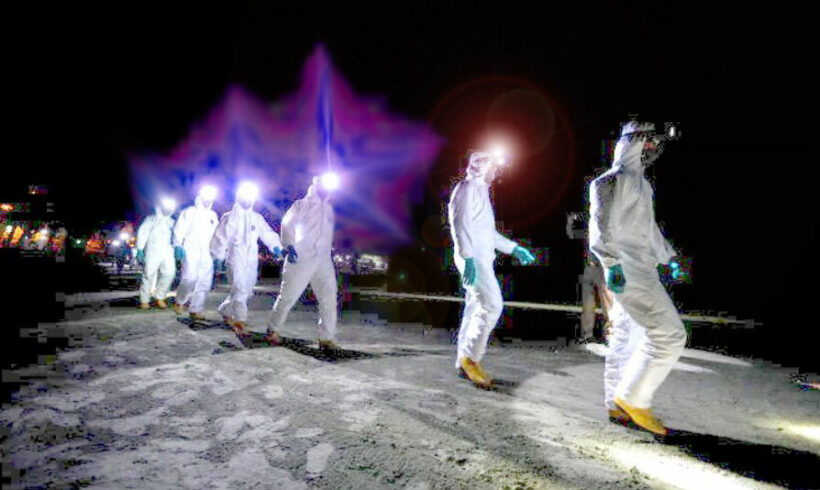 PHOTO: Officials inspect as the Rayong oil spill has hit the beach. (via Reuters)

They warn that it could take more than one month to clean and restore the beach where the oil washed ashore. The oil spill began when oil started floating in the waters off the coast on Tuesday as the company, Star Petroleum Refining tried to stop the oil from reaching Rayong beaches. Original estimates put the spill at about 160,000 litres of crude oil though the Bangkok Post quoted a leak of about 50,000 litres.

The leak occurred on Tuesday evening at a mooring point off the coast where oil tankers load and offload. A day later the leak was brought under control. But now the crude oil has spread to cover a 47 square kilometre patch of the sea that has slowly drifted to the beach in Rayong.

The director-general of the Pollution Control Department reported late yesterday that the oil slick had made landfall, having witnessed firsthand the oil arriving on the beach in the Muang district at Mae Ramphueng Beach. Satellite images from the Geo-Informatics and Space Technology Development Agency, a government-run facility, confirmed that oil had washed ashore.

Now, the oil refinery responsible for the pipeline will be joined by officials from the navy and trained volunteers to begin the beach clean-up. The government has already filed a complaint to collect money for damages caused by the spill.

Counter-measures used in this spill did have a reducing effect though, with the damage so far much less extensive than a 2013 pipeline burst that dumped oil all over Rayong beaches and caused widespread environmental damage aside from kneecapping the fishing and tourism industries for months. Oil spill dispersants were dumped on the oil slick to soften the impact, and as the oil drifted ashore it was met by inflatable oil boom barriers that intercept the oil and block it from slipping past the tide line.

riclag
All manner of waste, debris and chemical, land on the beach there ! Shame! Its a pleasant place to go too,at times.

Cabra
1 hour ago, Graham said: Yeah, that's what was reported, do you believe the number ? You know how good they are with numbers in Thailand. Probably orders of magnitude difference vs reality

Race against time to prevent Rayong oil spill reaching the shore, 3 kilometres away