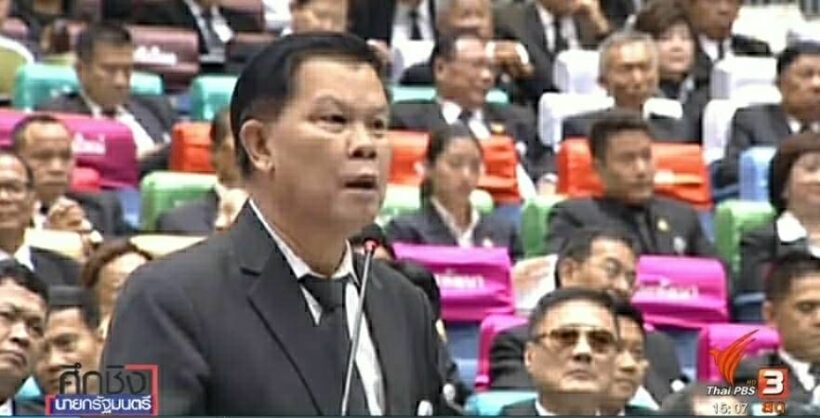 Renegade fugitive MP Waipote Arpornrat escaped the notice of parliamentary police, and government MPs, when he managed to stroll in the Lower House parliamentary chamber undetected during Wednesday’s sitting. Arpornrat is a member of Palang Pracharat, the most prominent party of the ruling government coalition after jumping ship from the Pheu Thai party,

He was stripped of his MP status on September 12 but has been laying low ever since.

He was apparently there to help the government reach a quorum for a vote recount, in an effort to stall an investigation of the controversial “blank cheque” Section 44 of the 2014 interim constitution. How he was able to get into the Parliament undetected will be a source of questions by the government opposition parties.

The former red-shirt leader faces arrest under a warrant issued by the Supreme Court, for his role in disrupting the 2009 ASEAN Summit in Pattaya. (The red shirts are a political movement that formed after the 2006 coup against the PM Thaksin Shinawatra and live on, philosophically as the Pheu Thai party).

The warrant was issued after he failed to appear in court on Tuesday. Two other red-shirt leaders, Samroeng Prajumrua and Worachai Hema, were sentenced to four years in prison over the protests at the Pattaya Summit.

House Speaker Chuan Leekpai and Deputy PM Wissanu Krea-ngarm have said separately that police can arrest Waipote on sight, but parliament police, conveniently, missed his presence and no Government MPs reported that they saw him.

Waipote was one of 250 government MPs who appeared in parliament after the Government party whips to make sure they attended.

On September 12 it was reported that, “Palang Pracharat MP for Kamphaeng Phet province Pol Lt-Gen Waipote Arpornrat has lost his MP status after the Supreme Court upheld the 4 year prison sentence handed down by the Appeals Court for his involvement in the disruption of the ASEAN Summit in Pattaya in 2009.”