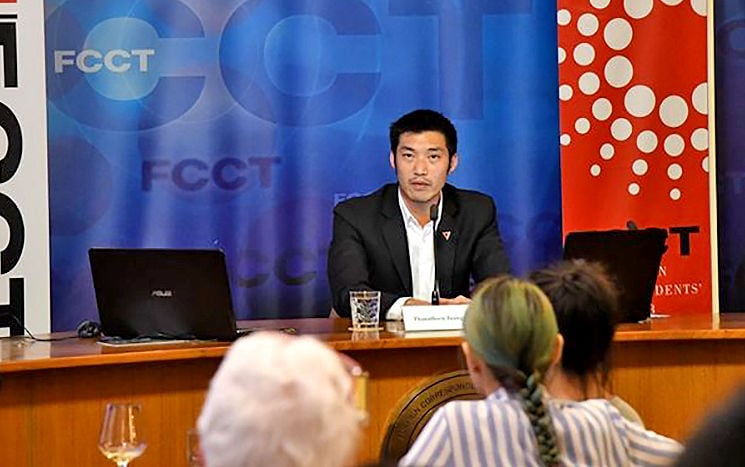 PHOTO: Thanathorn Juangroongruangkit, the leader of the Future Forward Party, at the Foreign Correspondents’ Club in Bangkok – Khaosod English

He was speaking yesterday at the Foreign Correspondents’ Club in Bangkok. Future Forward and its members face more than two dozen lawsuits from police, the attorney general, the Constitutional Court and the Election Commission, as he read out the list of litigation against him and the progressive part, as reports by the Bangkok Post.

“The establishment are pushing people out. They seem certain they can contain it and control it. But many think otherwise. I think this is a very dangerous gamble.”

Thanathorn, a critic of the establishment, opposes military influence in a country with a long history of coups. He was removed from parliament in November for allegedly violating media shareholding rules. He says the accusations are politically motivated.

“They consistently use fake news and misinformation to discredit opposition. They brand us as traitors, as anti-monarchy, creating hatred that divides the people of this country,” Thanathorn told reporters, in his strongest comments since his removal.

Thanathorn says he has no control over the timing of protests, that “the anger of the people is real” and that the anti-government Run Against Dictatorship, or Wing Lai Loong (“Run to oust the Uncle”), scheduled for January next year, will be a test of sentiment toward the ruling coalition.

After the speech, a member of the Committee to Return Happiness to the People said many politicians were hypocrites and troublemakers.

A spokesman for Palang Pracharat, the ruling coalition’s biggest party, said he disagreed with Thanathorn’s comments.

The opposition FFP emerged as the third largest party, and became part of an alliance that today controls nearly half the lower house of parliament.

A deeply divided parliament and the government’s slim majority have shone a spotlight on political risk, in a Thailand where the economy is struggling. Observers are split on whether the ruling coalition can survive future tests, especially after the government’s shock defeat in a recent ruling over the controversial Section 44 of the 2017 Constitution.

Thanathorn says he doesn’t support violence, but that tension is rising and “a storm might be coming”.

“I see my role as a chain breaker. To break the chain that’s preventing us from advancing further.”