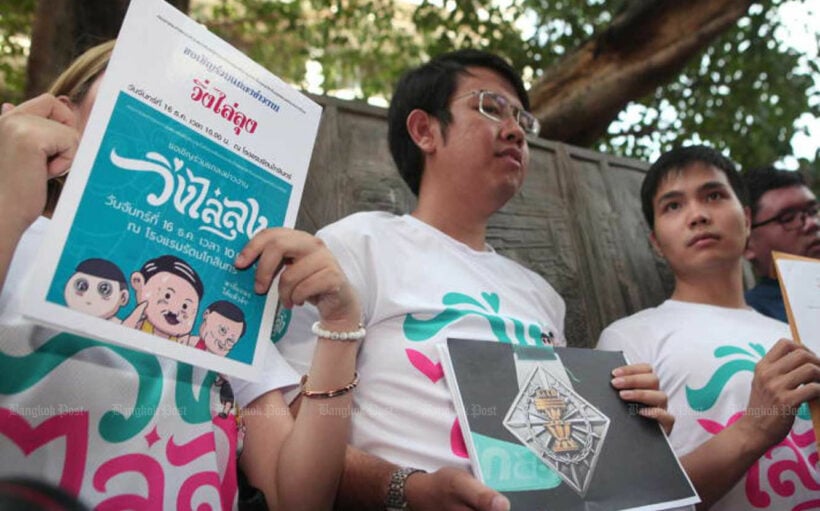 University students have finally been allowed to hold a press conference on the “Wing Lai Lung” (Run to Oust the Uncle) event at Thammasat University in Bangkok. Earlier requests for two other locations to hold their media gathering were denied.

One of them was the Foreign Correspondents’ Club of Thailand…

The professional committee of the Foreign Correspondents’ Club of Thailand is concerned about pressure from Thai police to cancel a planned press conference. Over the weekend the FCCT’s management was asked by Lumpini police station to cancel a booking by a group involved in the ‘Run Against Dictatorship’ planned for next month. The group had agreed to pay to use the FCCT for a press conference announcing the event. The police explained that the title of the event was objectionable, and that they considered it likely to create what they called a “mob.” They also stated that there would be serious consequences for the FCCT – suggesting possible closure — if it did not comply with their request. After discussion with the group, the organizers agreed to find an alternative venue – FCCT Facebook page

The running event was foreshadowed at Saturday’s gathering of protesters in support of Thanathorn Juangroongruangkit and the Future Forward Party. The thousands that gathered on the skywalk linking the National Stadium and Siam BTS stations, heard the announcement about the proposed running event.

The 6 kilometre run is scheduled for January 12, 2020, although police have yet to approve the proposed route.

Whether the police considering the route will treat it as a political or sports event will soon become apparent. At this stage the government have had little to say about the proposed running event with the controversial name.

According to Thanawat Wongchai, an economics student from Chulalongkorn University and strategist of the Student Union of Thailand, the run will start from the university and head to the Democracy Monument. Runners will make three rounds around the monument before heading back to the university’s football field.

Participants are expected to gather at the university from 4.30am, with the run to start at 5.30am.

Thailand has been under a civilian government since May this year, which should make such orders or even “suggestions” to curb free speech a thing of the past. In demanding the cancellation of this week’s event the police gave no legal justification, although they made it clear they were acting on orders from higher up.

Adviser to opposition leader calls on Thai PM to resign