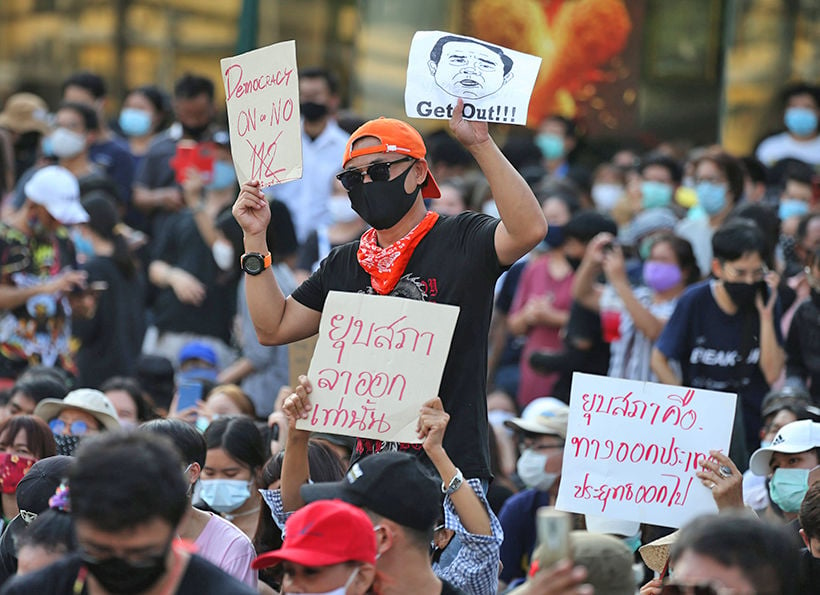 Students and young people held anti-government demonstrations in several provinces yesterday, continuing a week of protests sweeping the country. Demonstrators are demanding the dissolution of Parliament, a rewritten Constitution and an end to official and unofficial intimidation of government opponents – none of which are even remotely likely to happen, especially the first two.

In the western Kanchanaburi province, at about 5:40pm a group of around 50 young people comprising secondary school and university students gathered at an open ground on Lak Muang road in the central city district. They held  placards and banners with messages attacking the government and “military dictatorship.”  They called for the House of Representatives to be dissolved to make way for a new election, for the government to stop all forms of intimidation of the people and for the constitution to be rewritten.

The demonstration was peaceful. About 50 police and military personnel were deployed to ensure law and order. At 6pm, the demonstrators sang the national anthem and flashed the trademark 3 finger sign with their hands. They yelled “Down with dictatorship. Long live democracy” 3 times before dispersing.

In Samut Prakan, just south of Bangkok, at about 5pm a group of students and young people gathered at the open ground in front of the city tower. Student leaders took turns on a stage to call for a House dissolution and for PM Prayut Chan-o-cha to resign. At 7pm they switched on the lights of their mobile phones and flashed the 3 finger sign before ending the demonstration.

In the central northern Phetchabun province, at around 6pm about 10 youths staged a brief gathering in front of the clock tower in Lom Sak district to voice the same demands.

A protest is planned for Phuket’s Saphan Hin this evening. Local police have been alerted to the demonstration and will be in attendance.