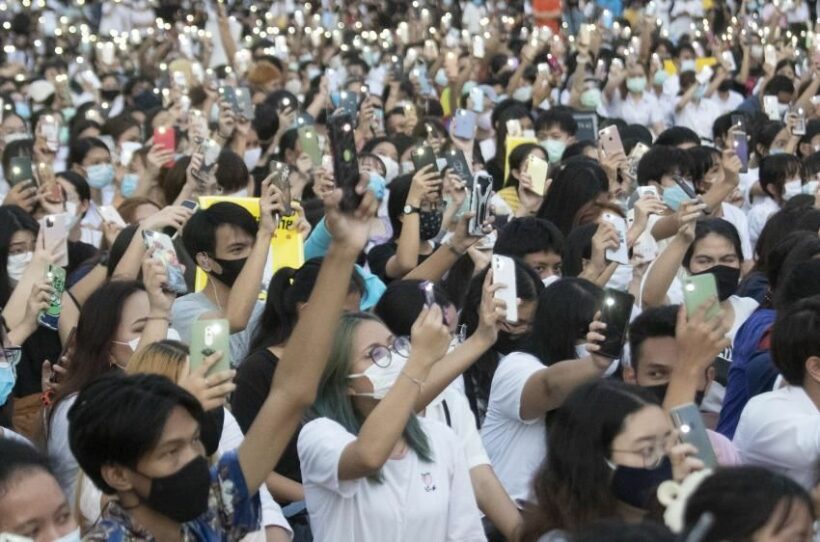 Pro-democracy demonstrators yesterday called on schools and colleges to allow on-campus rallies as pressure grows on them to ban “risky” political activities. The leader of the opposition Move Forward Party posted on Facebook that safe places for students to air their views are dwindling and that youngsters “should be allowed to carry out activities there”.

Pita Limjaroenrat’s remark came after Thammasat University pledged to prevent a recurrence of Monday’s rally at its Rangsit campus, where comments made by protesters potentially violated Section 112 of the Criminal Code, also known as the lèse-majesté law, which criminalises criticism of the Royal Family. The students expanded their original 3 demands to include reform of the Monarchy, sparking fears that it could trigger violent confrontations between royalists and their opponents, similar to the Thammasat University Massacre of 1976

Pita said confrontations will not take place and the student activism won’t culminate in a bloody crackdown like the October 6, 1976 incident if those in power exercise restraint and don’t resort to violence.

“By refusing to hear them and dismissing their voice as a threat to security, the nation and the institution, means we are not actually listening to them. The PM promised to listen but authorities continued to harass them and make arrests. We’re killing the future with our own hands.”

He described the students’ expanded demands as “an inconvenient truth”.

Chaturon Chaisang, former chief strategist of the defunct Thai Raksa Chart Party, posted on Facebook that the public should remind authorities that the use of violence would only deepen the political crisis. He said the government should listen to the students and encourage talks while pointing out the government and the House of Representatives are on the right track by agreeing to a constitutional rewrite. However, he said, they must be sincere in the charter rewrite push and make the amendments timely.

Their views were echoed by former Democrat candidate Parit Wacharasindhu who called on all parties not to gag students and to create and protect safe space for them even though they may have differing views.

Thammasat University’s student organisation insisted Monday’s rally was not illegal and it had a good intentions toward the country. It also said university executives should not bow to public pressure and should adhere to the principles of democracy.

A total of 105 lecturers from various universities on Wednesday signed to support the students’ 10-point demand for the reform of the Monarchy and called on the public to face the challenge with patience and reason.

Proposals for reform of the monarchy by youth-led protests have met with both praise for their bravery and fierce criticism for touching on a taboo topic in Thai society. Monday’s rally ended with the reading of a manifesto containing 10 demands.

Among them was a proposal to nullify Article 6 of the Constitution which prohibits any legal action against the Monarch, and to scrap the lèse-majesté laws. They also urged the government to separate the Monarch’s personal wealth from assets under the Crown Property Bureau, which are estimated to be worth many billions of dollars. The manifesto also asked the government to cut the annual national budget of the palace in line with economic conditions, adding that donations for the Royal Family should come to an end. It also proposed an end to 1 sided education that praises the Royal Institution. Meanwhile, the Monarchy should not to endorse any coup and should refrain from expressing political views in public.

Protesters also called for investigations into the suspected forced disappearance of individuals who had been outspoken against the Thai Head of State.

More than 100 academics nationwide issued a statement on yesterday to voice their support. They say the proposal does not undermine the Palace:

“The 10 proposals do not violate the criminal law in relation to His Majesty, nor does any of the information in the manifesto aim to defame the King. On the contrary, it’s a straightforward proposal that aims to protect the constitutional monarchy and democracy.”