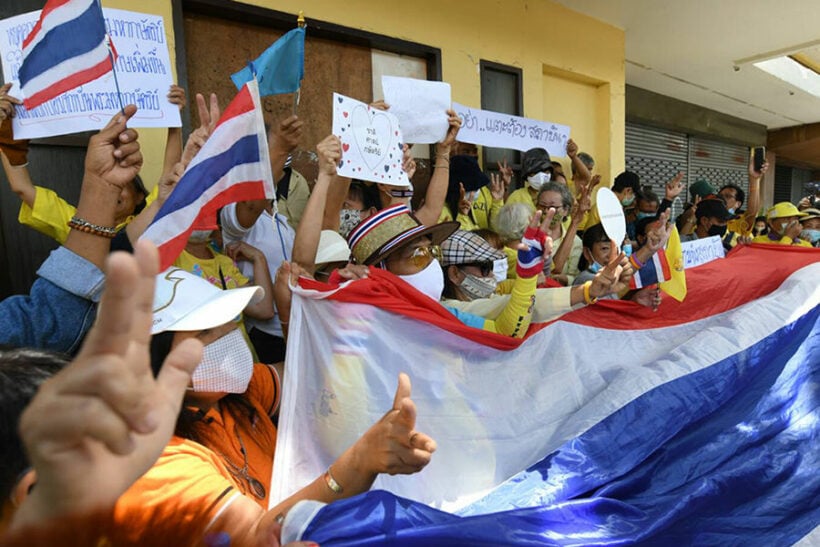 Following weeks of anti-government protests, in which some participants have been accused of making veiled anti-monarchy references, around 100 activists gathered at Bangkok’s Democracy Monument yesterday to show their support for the monarchy. Participants were former polytechnic students, congregating under the banner, “Polytechnic Students for the Nation.”

Aged in their 40s to 60s, theirs was the first counter-demonstration since protests against PM Prayut Chan-o-cha and his administration first began around 2 weeks ago. A day before the protest took place, the PM voiced his concern about the possibility of the counter-protest leading to violent clashes between the two groups.

LIVE from the Democracy Monument where pro-establishment protesters are gathering to show their support for the monarchy.

Tossapol Manunrat, leader of the pro-monarchy group, says they are not against those protesting against the government but warned that they must respect the monarchy.

“We, the Polytechnic for the Nation, are loyal to the nation, religion, and the monarchy, which are the important backbone of the constitutional monarchy regime. We’re not against the protests, but they must not do anything that crosses the line, which can lead to violence. We will take action by giving the right information about the monarchy and expose the real agenda of those who use the youths for their anti-monarchy ends.”

The government has already warned anti-government protesters to leave the monarchy out of it. Thailand’s strict lese majeste law makes it a serious criminal offence to criticise the Royal Family, with offenders facing a maximum penalty of 15 years’ imprisonment.

Meanwhile, Tossapol adds that there can be no guarantee the group won’t resort to violence, saying it will do what it has to to defend the monarchy.

“It depends on the situation. Our activity will certainly be more intense in the future.”

One of the protesters, 67 year old Chaiyakorn Hommontra, says his respect and love for Thailand’s monarchy will never die. He adds that his participation has nothing to do with the anti-government protests but is solely to show his support for the monarchy.

“We always pay homage and remember the good deeds of Their Majesties, from King Rama I to the current reign. Our love is deeply rooted in our hearts until the day I die. I don’t know about the other things. I don’t have anything in mind, but I will not let anyone harm the monarchy. I’m 67 now and my loyalty to the monarchy has never declined.”