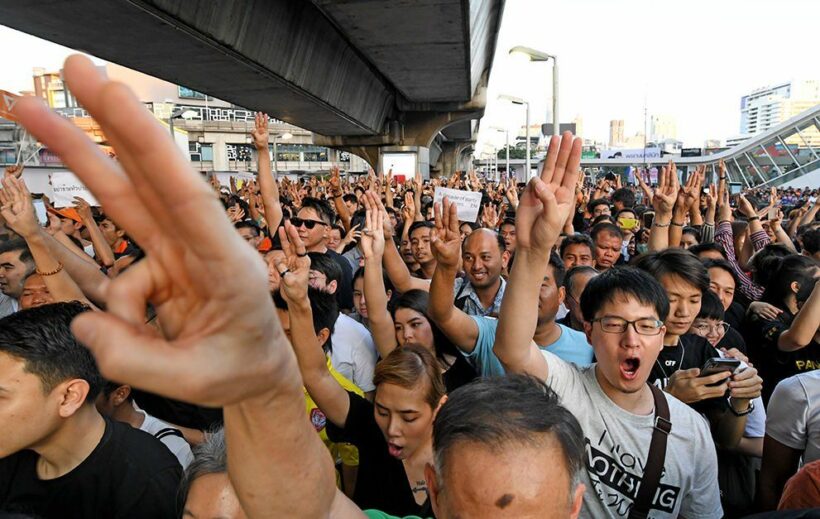 Bangkok Police are collating evidence to charge leaders of Saturday’s political gathering on Saturday held on the skywalk linking the National Stadium and Siam BTS stations in Bangkok, after discovering the rally was held without official permission.

Chief of Metropolitan Police Division 6, Pol Maj-General Metee Rakpan, says the police were checking if the rally, near the Pathumwan intersection was against the law, as the leaders had not notified Pathumwan Police Station.

Meanwhile Senator Somchai Sawangkarn also posted a message on his Facebook account stating that the rally was illegal as the Public Assembly Act requires organisers to notify the event in advance, and prohibits the assembly from taking place within a 150 metre radius of the palace. The Sra Pathum palace is located nearby the Pathumwan intersection. It’s the official residence of Princess Sirindhorn.

Thanathorn Juangroongruangkit, the embattled Future Forward Party leader, had called on his supporters to rally on Saturday, to express opposition to the current political situation and showing that people “would not surrender to dictatorship”.

“We come together today in a show of force, to show that we will not retreat and will not put up with things any longer. This is not a day to protect the Future Forward, but a day to to protect the future of all Thais.”

“An hour is enough. Once we’re done, we will go home.”

“They were just being playful” – Bangkok tuk tuk driver